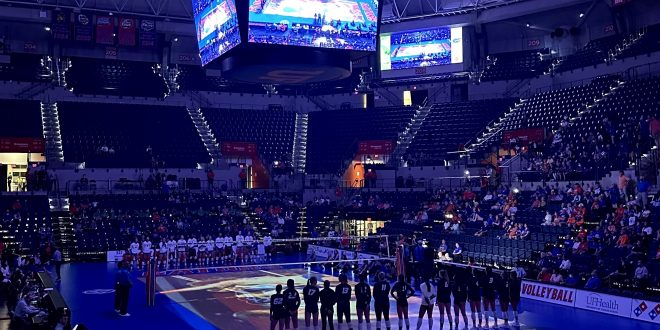 The Florida volleyball team made quick work of the Missouri Tigers in Friday night’s SEC matchup, sweeping the Tigers in three competitive games.  The win improved the Gators’ record to 19-4 on the season and keeps them in first place in the SEC.

Essix shared her thoughts on the Gators’ win over the Tigers.

From the first serve, the Gators made their presence known by putting up a solid block that the Tigers couldn’t work around. In addition, Markova and Bre Kelley contributed five kills which helped Florida jump to a quick 15-7 lead.

The Tigers inched within three points of the Gators forcing Florida head coach Mary Wise to call a timeout. A miscommunication led to a dropped ball in between all six players on the court.

Missouri continued to tally points off Florida errors resulting in another Gator timeout, down 23-22. Coming out of the timeout, Kaylee Cox‘s serve went long for the Tigers to make it match point. Sofia Victoria ended set one with a block.

Markova contributed seven of the Gators’ 20 kills in the first set.

Despite a loss in set one, the Tigers didn’t quit fighting. Missouri took a 12-10 lead, largely in part to serve receive and defensive errors from the Gators.

Essix tied the game at 16 apiece with a monster block. She followed it up with a kill of her own to extend the Gators’ lead 19-17. A double block by Essix and Markova ended the second set with the Gators on top 25-17.

Neither team was able to hold onto momentum at the start of the third set. Missouri inched to a 15-12 lead, forcing Wise to call another timeout to regroup her team.

Florida and Missouri continued to fight for every point. The Tigers went on a 3-0 run to give themselves a 21-19 lead. Back to back Florida attacking errors resulted in another timeout from Wise.

Beason posted a kill coming out of the timeout to shift the momentum to the Gators. A Missouri attack error tied the score at 21 all. The Gators rallied to take a 24-23 lead before Beason executed a kill to secure the win.

The Gators return to the court November 12 against the Texas A&M Aggies in College Station, Texas. First serve is at 5 pm eastern time.

Shailey Klein is a second-year journalism major specializing in sports and media at UF.
@shaileyklein
Previous SEC Teams Path to the CFP
Next Saint Francis Closes Out Their Season with a Tough Loss