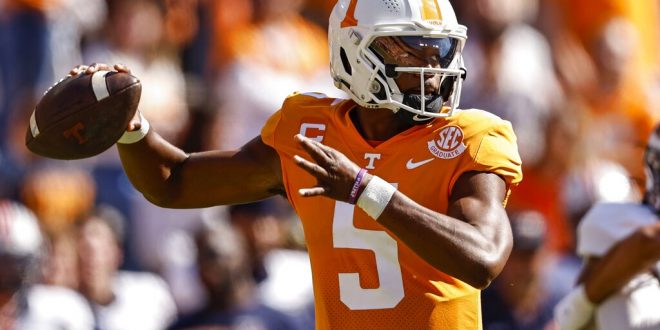 Tennessee quarterback Hendon Hooker (5) throws to a receiver during the first half of an NCAA college football game against the Tennessee Martin Saturday, Oct. 22, 2022, in Knoxville, Tenn. (AP Photo/Wade Payne)

SEC Teams Path to the CFP

With the first official CFP rankings being released we have our first look at the landscape and what teams have a chance to make it to the playoffs. For this, we will take a look at the SEC teams left that are ranked in the top 15 of the rankings and still have a chance at the CFP. We will look at their schedules and see who they will need to beat to make it into the CFP.

THE TOP 25 CFP RANKINGS HAVE ARRIVED‼️ @Vol_Football leads the pack at No. 1️⃣ pic.twitter.com/7lj5qo00d3

The Ole Miss Rebels come in ranked 11th with an 8-1 record with their only loss coming to LSU. Ole Miss can still make the CFP with this one loss but they will need some help. The first thing the Rebels will need to do is win out. With a one-loss Alabama team coming up at home along with a game at Arkansas and at Mississippi State.

The Tigers just barely break into the top 10 ranked 10th being 6-2 with their losses coming from an early close game with FSU and losing to top-ranked Tennessee. Since they have two losses they will need to make a push to the playoff by winning the SEC championship. Like Ole Miss, they will need to win out with their remaining schedule.

They have 4 games remaining with Alabama, Arkansas, UAB, and Texas A&M, If they win they will be the team representing the SEC west in the championship game. Because LSU has already beaten Ole Miss they have the tiebreaker if they end with the same record so they don’t need any help from other teams. They would need to win the SEWC championship game to make the playoffs.

Alabama gets ranked right outside the top 5 getting ranked 6th at 7-1. The Crimson Tide controls their destiny at this point in the season. Their only two challenging games to play came at Ole Miss and LSU and their only loss came from number one-ranked Tennessee.

If Alabama makes it into the SEC championship and wins they will be in the CFP. However, they also have a chance to make it into the playoffs without losing the championship game depending on how Georgia and Tennessee play coming down the stretch. If both of them can amass a loss it makes the argument for a two-loss Alabama more convincing.

Georgia is currently one of two teams that sit undefeated this season at 5-0. The Bulldogs after the first CFP rankings come in 3rd, While the reigning national champions certainly can beat any team their resume does not stack up to that of Ohio State or Tennessee to be able to put Georgia over them.

This weekend when Georgia takes on Tenseness will be a massive game for them as the winner will most likely go on and represent the east in the SEC championship game. If Georgia wins this weekend they are almost guaranteed a spot in the CFP however if they lose their chances get smaller but do not go away entirely. If Georgia’s only loss came to the number one ranked team they would still have a great chance to make it in.

The number one ranked team in all of college football in Tennessee. They have had one of the hardest schedules of all SEC teams playing LSU, Alabama, and Georgia. They have shown that they can play both sides of the ball getting stops when needed and scoring in shoot-outs.

Just like Georgia if Tennessee wins this weekend they have a spot almost guaranteed as long as they win their remaining games. But if they were to lose because of the strength of the schedule they still have a great chance to make it with one loss.