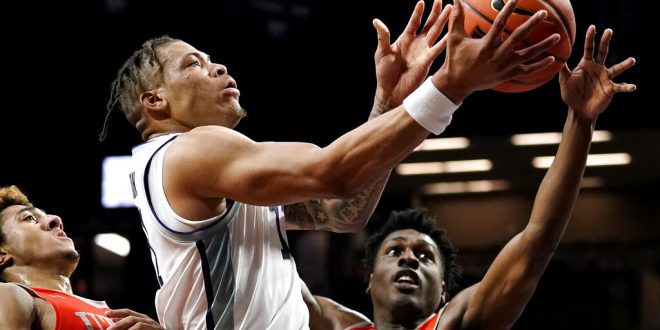 The ex-Gator Keyontae Johnson played and started his first game for Kansas State on Monday. The last time Johnson took the court for an entire game was in 2020 for the Gators before collapsing on the floor. Johnson transferred to K-State in the spring and started for the team in their 93-59 win over UT Rio Grande Valley.  Johnson finished the game with 13 points and four assists and played 28 minutes.

Johnson is entering his 5th year of college eligibility. He averaged 16 points per game in the 2020 season.  He was a part of three postseason teams when playing for the Gators. Johnson had narrowed his decision down to four colleges when he graduated from UF and wanted to play his final year of eligibility. He picked Kansas State over Memphis, Nebraska and Western Kentucky.

Kansas State is headed by first-year head coach Jerome Tang. He explained that it didn’t matter if the guys felt they played well or badly. What was important was Johnson played a basketball game.

Johnson talked about his return and said “I thank God every day. He gave me a second chance at life. Every day, before I get on the court, I just thank him and keep praying for a healthy season. ”

What’s Next for K-State?

Kansas State takes a trip west on Friday to face off against the California Golden Bears. Tip off is set for 7 p.m.

Then, K-State heads back home to host the UMKC Kangaroos on Nov. 17 in its second home game. Tip off for that matchup will be at 6:30 p.m.