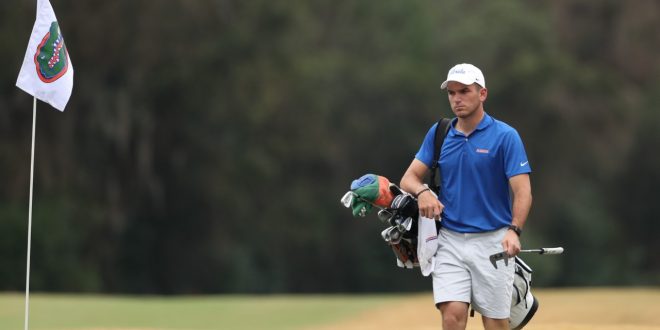 It’s a Monday evening and Giovanni Manzoni just landed in Atlanta for a connecting flight back to Gainesville. The jet lag is beginning to set in after an eventful couple of days in his home country of Italy, but the fifth-year golfer at the University of Florida will be ready for action come Tuesday morning, back to his routine with little time to re-charge.

Like many athletes, Manzoni lives what seems like a double life. On top of his position as a full-time student and athlete, Manzoni’s golfing talents offer him the opportunity to play in events as an amateur all around the world. That includes his most recent endeavor to the DS Automobiles Open in Italy. Manzoni placed No. 110 among golfers like top ten stars Matt Fitzpatrick and Rory Mcllroy.

“I actually played pretty good, but the result wasn’t great,” Manzoni said. “It’s ok. It was a great experience, and (I’m) all good with that.”

Manzoni was one of only three amateur golfers the Italian Golf Federation invited to play in this event part of the European Tour, which is comparable to the U.S.-based PGA Tour.

Where it all began

Before grand tournament finishes and amateur golf rankings, 7-year-old Manzoni started his career to the credit of his father, who he said began playing no more than 10 years before him. Growing up just outside of Milan, Manzoni engaged in soccer and skiing, too. Golf, however, brought him the most joy.

For the first few years, the young boy spent his time at the driving range learning how to swing. At the putting green, he and his father engaged in chipping games to see who could land the ball closest to the hole, but Manzoni’s competitive edge in golf didn’t occur to him until he hit the course for the first time.

“I was like oh, I really want to get better. To be a good golfer on the golf course… That was way more fun than just being on the driving range.”

The community of golfers that Manzoni and his father developed over the years added to his passion for the sport, too. Those people brought the two back to the course consistently. They gave him a chance to have fun while improving his game.

“My dad had a lot of friends, and I would play with his other friends, so it was like a very good group,” Manzoni said. “From there, basically we started to go every weekend and a couple times throughout the week, and I mean it was very fun because we were getting out there and doing a couple games.”

Manzoni decides to give it his all

Then, at the age of 12, not only did he begin to beat his father on the course, but he also decided to commit to golf full-time. For Manzoni, the competitive nature of soccer that living in a western European country automatically instilled did not fascinate him.

“When I was 11, there was more stress playing soccer than golf, so I was really enjoying playing golf.”

In the years after Manzoni devoted all his time to golf, he flourished. He picked up wins in competitive tournaments and gained recognition from people overseas. At 17, he considered coming to the U.S. for the first time.

“I was really afraid at the beginning because my English was terrible, and the U.S. is pretty far from home, so I was thinking like, oh, I’m alone on the other side of the world.”

Manzoni spent his first two years at Lynn University in Boca Raton. He came to UF in 2020 and has since attended his first American football game ever at UF’s home stadium.

Manzoni’s time at UF and beyond

In addition to new experiences, Manzoni has eight top-10 finishes in his 35 most recent golf events ranging from collegiate to professional levels. He has earned a ranking of No. 151 in the World Amateur Golf Rankings out of 4,597.

Manzoni’s competitive nature, which he says comes from his father, is prevalent in all aspects of his life. Not only is he among one of the best golfers in his home country and an accomplished Division 1 collegiate athlete, but he is also one of just seven members of the Florida Gators men’s golf team to be recognized on the SEC Academic Honor Roll last year.

“I didn’t want to have bad grades, so I put all the effort in,” Manzoni said. “I had a couple problems to write essays at the beginning since my English was not great. Now it is a little bit easier, but I really like my major, sports management, so I think that helps a lot because I’m studying stuff that I really like.”

Manzoni’s character on and off the course

Manzoni’s passion for his friends is another thing that his teammate, Fred Biondi, a senior from São Paulo, says he puts his all into.

“Gio is one of the nicest guys that I’ve ever been on the team with,” Biondi said. “I mean, he would do anything for you. He always has a smile on his face… He’s always there for you and is just an unbelievable guy and person.”

Despite not placing as high as Manzoni wanted to in the DS Automobiles Italian Open or in other recent tournaments at UF, his love for the game is still evident, according to Biondi.

“He’s so passionate, and I’ve never seen Gio ever upset or ever frustrated or anything. He’s very grateful to be here and a very hard worker, too.”

When asked about his favorite memory with Manzoni, Biondi said the two had the opportunity to play at the TPC Sawgrass tournament in Jacksonville a few years ago. They were the only two players from the team who went together, and Biondi said it was the coldest day he had experienced in Florida since he moved.

The past and the present coming together for Manzoni

After this year, Manzoni plans to go back to Italy to pursue professional golf. That has been his dream since he decided to quit soccer and skiing. In fact, when he was 12, he remembers writing a note on a piece of paper saying, “When I grow up, I will be a professional golfer.”

Now, that note sits under his mother’s keyboard in her office back in Italy.

Despite his many accomplishments, Manzoni sometimes forgets what he is capable of. That little note tucked under his mother’s keyboard, however, often reminds himself of young Manzoni’s dream all over again.

“This was the best decision of my life, to come here, because I can really improve a lot and be ready when I will turn pro after my graduation.”

Previous Hornets Sting Magic
Next Realignment of the SEC