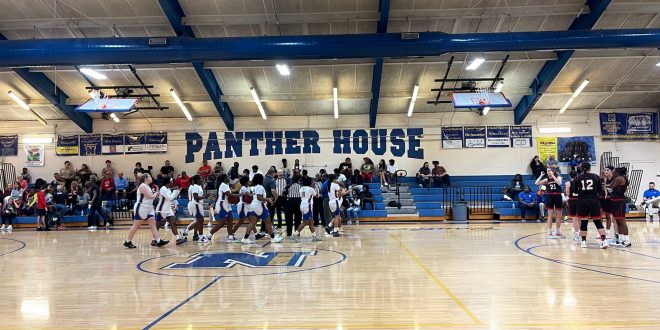 Stand-out freshman Brandy Whitfield led the women’s varsity basketball team to a 51-21 victory, bringing their record to 1-1 on the season.

Newberry struck early, putting two on the board less than ten seconds in and setting the tone for an exciting night of basketball. The energy in the crowd was contagious as their cheers echoed throughout the gym.

The Panthers put up a strong defensive front, allowing just four points in the first quarter while simultaneously scoring fifteen of their own. Unwilling to give up their lead, Newberry maintained the intensity into the second quarter. The result: a thirteen-point lead at halftime.

The Panthers lead by 13 at the half. pic.twitter.com/8g2h1svSBA

The Panthers emerged from the locker room ready to finish what they started. They put up an impressive 25 points in just eight minutes. During this stretch, Newberry’s defense elevated even further, giving up only two points. Newberry’s dominant run was capped off by back-to-back threes to finish the third with a score of 49-13. This incredible quarter can be accredited to the Panthers strong communication on both sides of the court, as they were successful in limiting the Hornets’ scoring chances and steamrolling their defense.

Brandy Whitfield was a force to be reckoned with in tonight’s game. She put up 22 points, with seven two’s, two three’s, and going 2/3 on free throws. In addition to her outstanding offensive performance, she played a key role in stopping the Hornets from scoring. Whitfield revealed her abilities on both ends of the court, demonstrating that she is a well-rounded player that positively impacts her team.

The defensive front was led by junior Natreana Akanni and sophomore Sarah Beaulieu. Both players fought hard to prevent the Hornets from making a basket by closely guarding their opponents, working to recover every rebound and diving for every loose ball. Their efforts did not go unrecognized and they played a huge role in the team’s overall success.

The Panther House went wild, celebrating a 30-point landslide victory. Newberry demonstrated their dedication and ability to work together as a team in their defeat of Lafayette. The unrelenting support of the fans helped fuel the Lady Panthers to the end.

The Panthers dominate in their home opener against the Hornets with a final score of 51-21. pic.twitter.com/ljv1XRw62T

It was a successful night for the Newberry Lady Panthers. Both squads will travel to Columbia High School on Nov. 17 to face the fighting Tigers. JV tips off at 5:30 p.m. and Varsity tips off at 7 p.m.

Rachel Rosen is a sophomore at the University of Florida studying journalism with a specialization in sports and media.
Previous Santa Fe Raiders Battle PK Yonge in Tuesday Night TipOff
Next FEATURE: Living, Learning and Leading: How Faith Dut Has Found A Home With The Florida Gators