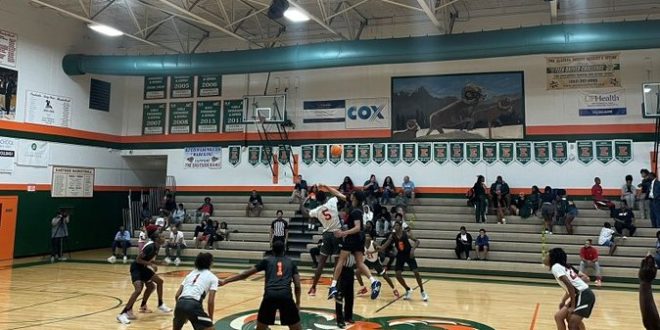 By Madison Broach and Lauren Herinckx

In the second game of the TipOff Classic, hosted at Eastside High School, the Santa Fe Raiders took on the PK Yonge Blue Wave. It was a nail-biting matchup, with the teams trading off the lead the entire game.

In the first period, the Raiders and the Blue Wave played very competitively. Number 5 for Santa Fe connected on both of his free throws, and Ty’quez Towns was called for a block with 1:48 remaining on the clock. The period ended with the Raiders attaining 6 fouls and the Blue Wave finishing with two. It is no secret this was a very physical game. After the first period, the score stood at 12-9 in favor of PK Yonge, although their lead could have been greater if they had been successful at more of their 3-point attempts. PK Yonge fans became fired up when a setup by a teammate led to an energetic dunk by number 0 for the Blue Wave.

In the second period, both teams were really aggressive getting into the box on almost every possession. Kaleb Johnson and Jamil Watson Jr. worked together to maneuver around PK Yonge’s defense and bring points to the board. The Blue Wave’s impressive defense was able to steal the ball from the Raiders multiple times and they were sure to capitalize on the opportunity. Although both teams fought to the end of the half, Santa Fe High School went into halftime with a 3-point lead with a score of 24 to 21.

At the end of the half, the raiders lead PK Yonge 24-21. Kaleb Johnson proved to be a standout this period with several drives to the basket and great ball-handling. pic.twitter.com/A9z2T7w0XY

The Blue Wave started off the third period with a basket, making the score 24-23, still in favor of the Raiders. It was clear that the Raiders had rallied and decided to slow the ball down and focus on intentional passes. However, PK Yonge was able to deliver multiple show-stopping dunks to stay in the game. At the six minute mark, number 1 for the Blue Wave made a free throw to tie the game at 24. He then made his second free throw to give PK Yonge the lead. With 5:33 left on the clock, Kaleb Johnson had a great steal but was not able to turn it into a basket. Less than a minute later, number 32 dunked the ball for the Raiders, but PK Yonge still led, 27-24. The game tied again during the third period at 36-36. Jamil Watson Jr. then earned the lead for the Raiders on a free throw with 25 seconds left in the period. The Raiders entered the fourth leading the Blue Wave 37-36.

Number 22 for PK Yonge opened the fourth period with a three-pointer, and his teammate soon followed with another three. Both teams proved that they were determined to fight until the very end. Each team capitalized on every little mistake in ball handling and any hole in the defense. The Blue Wave did not relinquish their lead after their first three-pointer until only 2 minutes and 25 seconds remained in the game. However, PK Yonge did not back down. They quickly battled back to bring the score to 54-47 a minute later. Number 10 for the Raiders made both his free throws with 14 seconds left in the game, but there was not enough time to battle back against the Blue Wave.

PK Yonge comes out on top after a strong 4th period, for a final score of 56-51. Next, the tournament host Eastside Rams will take on Bronson in the last game of the night. @ESPNGainesville pic.twitter.com/BLgy5oOiNI

Although they fought hard, the Santa Fe Raiders came up short with a score of 51-56. They will play again Thursday night in the second night of the TipOff Classic against Hawthorne at 6:30pm.