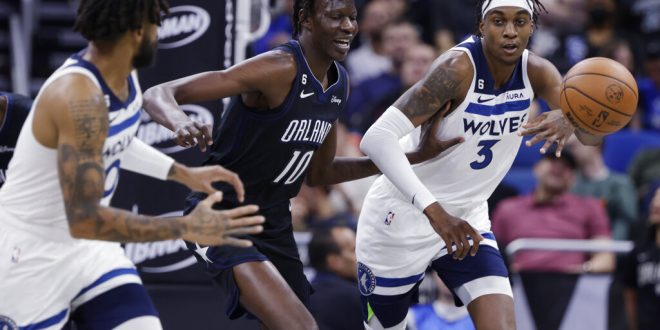 The Orlando Magic struggled at home on Wednesday night losing 126-108 to the Minnesota Timberwolves. With key players missing in the Magic’s starting lineup, the Timberwolves capitalized on this, creating an 18-point lead by the end of the first quarter. Minnesota’s display of dominance only continued throughout the game, with their lead extended to 25 by halftime, and as much as 27 throughout some points of the game.

Orlando fought to close the gap of what was starting to look like a blowout for the Magic with a strong all-around team effort through the fourth quarter. But Minnesota wouldn’t let themselves come up short-handed after already establishing such a strong start,

This will now be the Magic’s fourth game without rookie Paolo Banchero after he suffered an ankle strain just over a week ago in the Magic’s game against the Rockets. Despite trouble for the Magic, they were able to bounce back over the next few games, but fellow teammate Wendell Carter Jr. additionally joining Banchero on the sideline proved a huge setback for the Magic. Both players are the leaders in rebounds for the Magic and make up two of their top three-point scorers.

With key players missing, Bol Bol and Jalen Suggs stepped into an increased role, putting up 26 and 23 points, respectively. Bol additionally had 12 rebounds and Suggs posted six for both rebounds and assists.

For games played so far, Banchero is averaging 23.5 points, 8.3 rebounds and 3.6 assists for the Magic in his first season, making him undoubtedly one of the best from this year’s rookie class. He has been one of the main names in the conversation for NBA Rookie of the Year. Banchero has consistently put up impressive stats in each game he has played this year, however, missing the previous four games has been tough in his race for NBA awards. He has now dropped to No. 3 in his NBA rookie ranking, behind Bennedict Mathurin of the Indiana Pacers and Jaden Ivey of the Detroit Pistons.

For the Timberwolves, Anthony Edwards led the game putting up 35 points, eight rebounds, and six assists. Teammate Karl-Anthony Towns added another 30 points to Minnesota’s tally. Both scores were season-highs for the players. The team additionally posted Mtheir biggest victory margin of the season, shooting 52.3%.

Edwards was on fire from the get-go, hitting three 3-pointers and a dunk over the first five minutes of game time. The Timberwolves’ 18-point first-quarter lead was led by Edwards who put up 19 points throughout the quarter.

Next up the Orlando Magic travel to play the Chicago Bulls on Friday evening. The Timberwolves will also hit the road to take on the Philadelphia 76ers on Saturday evening.