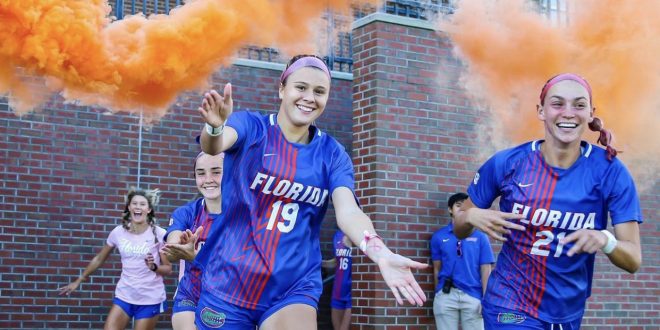 Maddy Pirrello and Madison Young run out onto the field before a game. (Photo taken from Gators Soccer Instagram)

Weekends and nights spent at the soccer field have been the norm for Maddy Pirrello for as long as she could remember. She started playing at the age of four and never quit.

“I just remember my parents put me in there as a regular kid in rec soccer and ever since there it took off,” Pirrello said. “ I have loved it ever since.”

As Pirrello got older, she did not limit herself to just soccer.

She played lacrosse, basketball and softball alongside soccer. It was not until she hit middle school age that she needed to decide what sports she wanted to keep up with and which ones she did not want to play anymore.

Pirrello decided on soccer and basketball. She liked the fast pace of the sport. The pace and transitioning kept her attention on the game so that she could not get bored.

“I just loved the team sport,” Pirrello said. It was a fast-transitioning game like soccer is. I just enjoyed the fast transitions. I was pretty good at basketball.”

After middle school, she chose to stick with soccer and started to make a name for herself. She played for New York City Football Club Academy on the U16/17 team and came in second in the 2018-2019 United States Soccer Development Academy Northeast standings.

Athleticism in her blood

The sport of soccer was not a foreign concept to Pirrello’s family.

Her mother started playing in high school and was recruited to play Division 1 soccer at American University. Pirrello used her mother’s experience to look up to her and aid her as an athlete.

Not only did her mother play, but her aunt and grandfather played collegiate sports too. Pirrello’s aunt played soccer and basketball at Dartmouth College and her grandfather was on the football team. Pirello admired her grandfather’s knowledge of what is like to play collegiately and used him for advice throughout her soccer career.

“He definitely is a big influential factor in my life with sports,” Pirello said. “He is also giving me advice, after every game, he will text me, I know soccer and football are different, but the collegiate experience is cool to bounce ideas off him and hear his thoughts.”

As her high school and club soccer career started to come to a close, Pirrello signed with the Florida Gators on November 11, 2020, under then coach Becky Burleigh. She was Florida’s head coach for 26 years until retiring in 2021.

“I wanted warm weather, but aside from that UF is a school for me that had everything,” Pirrello said.

Among her other options, the University of Florida stood out to her. The academics and the facilities were among the many reasons she chose UF.

“It was kind of a no-brainer for me it literally checked every box I could hope for,” Pirrello said.

Career as a Florida Gator

In her first season with the Gators, Pirrello had a lot on her shoulders like moving away from her hometown in New York to become a collegiate athlete. She played five games for a total of 45 minutes. She knew that if she wanted to play more in her second there needed to be some growth.

“[I have grown] mentally,” Pirrello said. “Last season I was able to grow a lot as a player. It is obviously hard leaving home and becoming a collegiate athlete, so just having that mental peace to push through anything or any struggles, being able to get through and just know it will all be worth it, in the end, is definitely the biggest growth I’ve had coming off last season.”

Right before the season, Pirrello was injured and could not participate in the first seven games. Her first game on the pitch was against Florida State, where the Gators lost, 5-0.

“It was kind of difficult because your first few games are where you want to make the impact or show yourself,” Pirrello said. “So I was a little nervous about coming back in my role on the team, but luckily coach gave me a chance when I got cleared and I was able to kind of improve myself in a way to now have a starting spot.”

From there she worked hard to earn a starting position for the SEC opener against Tennessee, where she scored her first collegiate goal. In that game, Pirrello became the 25th person to score their first goal in their first start at UF.

“That was a surreal moment for me because obviously everyone tells you when you first start to go out there and get yourself a goal,” Pirrello said. “When it actually happens against a team like Tennessee too, I just had a flood of emotions come over me, and being able to celebrate with all my teammates was awesome. It is a moment I will never forget.”

What it means to be a Gator

During her two seasons with the Gators and as a student, Pirrello has gained an appreciation for the Gator Nation and learned what it means to be a Florida Gator.

“There are really no words on how to be a Gator,” Pirello said. “It is an awesome thing to say you’re a Gator. Everyone kind of knows exactly when you say you are Gator what it means. It is more of a family feel everyone you know gives you so much support. For soccer, especially with the support system is just like so awesome. Between coaches and staff you could go to anyone for anything, so it helps being so far away from home feeling like this is also my home and everyone here is family.”

Molly is a fourth-year journalism major specializing in sports and media and working on a certificate in sports management at the University of Florida.
@_mollycooper
Previous After an Impressive Three Sets, UF Volleyball Comes Out Victorious in Mississippi
Next No.16 ‘Noles Defeat Gators 45-38 in Football Rivalry’s Highest Scoring Game