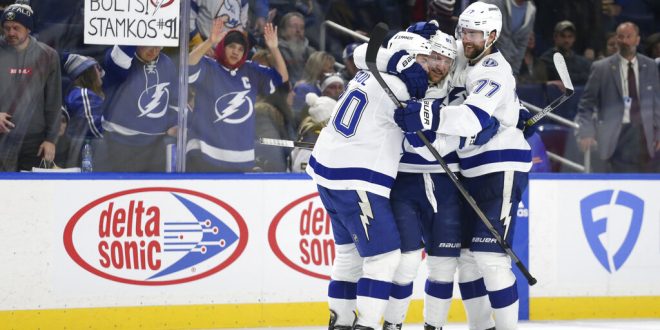 While it was not a defensive clinic, the Tampa Bay Lightning’s 6-5 win over the Buffalo Sabres had much of what fans have become accustomed to over the last several years. Monday, the Bolts went three-for-four on the power play, and captain Steven Stamkos stuffed the stat sheet. Stammer finished with an assist and two goals including the OT winner.

The Lightning battled back from a two-goal deficit to put the Sabres away on the road.

The Lightning were lethal with a man-advantage Monday, scoring three of its six goals on the power play. The team ranks sixth in the NHL, having converted 28% of its chances.

The Bolts opened the scoring when star forward Brayden Point scored with the man advantage. He added another power play goal later to tie the game at three, then Nikita Kucherov tied it again at five with a slap shot while the team was up a man once again.

The game was a battle. The Lightning scored the first two goals before Buffalo came roaring back to take a 3-2 lead. After Point scored his second goal of the night to knot the score at three, the Sabres scored two unanswered to make it 3-5. Tampa Bay stormed back to tie it, then No. 91 snapped home the game winner in overtime.

Steven Stamkos has had an excellent season, and Monday was business as usual for the captain. He is tied for tenth in the league with 12 goals this season.

Stamkos’s three points gave him 26 this season. He trails his superstar teammate Nikita Kucherov, whose 34 points place him third in the league.

Buffalo forward Tage Thompson added to his tally as well. His goal, the Sabres’ first of the night, was his 14th this year. Thompson is tied for fourth in the league.