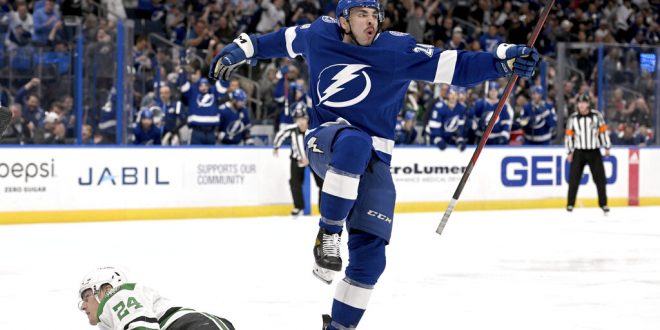 The Tampa Bay Lightning (9-6-1) beat the Dallas Stars (9-5-2) in an intense overtime matchup. Alex Killorn scored the clutch goal in OT to secure the victory for Tampa. The Lightning are now on a two-game winning streak heading into their game against Calgary on Thursday.

Back and Forth Sequence

This game featured lead changes in all three periods. It was a back and forth effort that ended with a late goal in overtime to decide the winner. The Lightning wasted no time, taking a 1-0 lead to begin the first period. The Stars would then respond at the end of the period to tie the game. This went on all throughout the game, with the second period having four goals scored total. It would be a goal late in the third period for the Stars that took the game to overtime.

In overtime, both teams went scoreless for the first three and a half minutes. Finally, with 1:17 remaining in the period, the Lightning converted the game winning goal.

The late goal in OT was assisted by none other than Steven Stamkos. That assist officially put him at 500 total career assists. This is a huge milestone for Stamkos and the Tampa Bay Lightning franchise. He has eight goals and nine assists so far on the season. Tampa sits at fourth in the Eastern Atlantic division. It is tied with the Florida Panthers.

For the Stars, Joe Pavelski scored his 430th career goal. This puts him at eighth all-time among US born players. His goal came in the second period to tie the game.

What’s next for the Lightning and Stars?

The Dallas Stars will look to bounce back from their loss on Thursday against the Florida Panthers.

The Tampa Bay Lightning are also in action Thursday. They face the Calgary Flames as they look to extend their win streak to three.