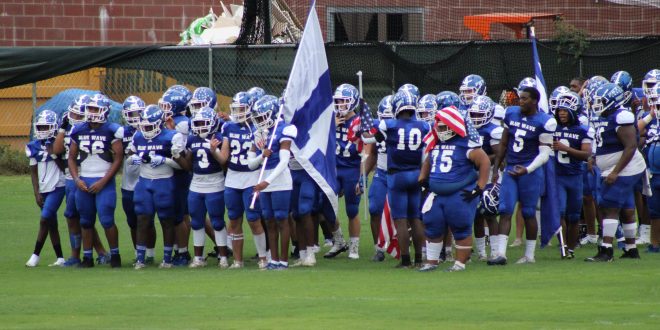 P.K. Yonge takes the field for their game against Eastside. A moment of silence was observed for the victims of the September 11th, 2001 attacks, and players carried American flags onto the field with them (Photo Courtesy: Keishla Espinal/ESPN Gainesville).

As the high school football playoffs near the end, the P.K Yonge Blue Wave have been eliminated from contention for the state final. Their final loss came at the hands of Trinity Catholic, who also defeated them in last year’s district final game. P.K. Yonge finished the season with a record of 4-8 and placed 2nd in district play.

P.K. Yonge played their final game of the 2022 season this past Friday against Trinity Catholic high school. Trinity Catholic came into this game with a record of 8-2 and were looking to defeat P.K. Yonge in the playoffs for the second straight year. This game took place in Ocala and was the Regional final. The winning team would move on to play in the State semi-final.

P.K. Yonge fought hard throughout but unfortunately could not find any rhythm on the offensive or defensive side of the ball. They only managed to put up 7 points on offense and struggled to move the ball against a stout Trinity Catholic defense.

The Blue Wave’s lone touchdown came from an Adrian Curtis touchdown pass. Curtis struggled to get going in the game and finished 6-12 with 58 passing yards. He also threw an interception in the game. P.K. Yonge also struggled to get the run game going with just 50 rushing yards on 20 attempts.

The Blue Wave finished off their 2022 season with a record of 4-8 and were able to compete in the regional finals. Their record in 2022 was a considerable drop off from their 2021 record of 8-4, however, there were still a lot of positives to take away from this past season.

P.K. Yonge was able to finish second in their district, behind Trinity Catholic. Their slow start to the season is where many of their losses can be found, as they lost their first three games to start the year. At a little over the halfway point of the regular season, the team sat with a record of 1-5. This was far from the start that many on the team had expected or hoped for and the team seemed determined to turn things around.

P.K. Yonge put together an inspired effort in their 7th game of the season. They dominated this game against district rival St. Joseph Academy by a score of 44-16. This win moved the team’s record to 2-5 and helped pave the way to a strong final stretch for the Blue Wave. The team was also able to win their final game of the regular season, and their first playoff game. They defeated Holy Trinity Episcopal Academy by a score of 35-3 in the regional semi-final game. This win would be their last of 2022 and was one of their largest margins of victory throughout the entire season.

While P.K. Yonge may have taken a step back record-wise, they were still able to win a playoff game, which is a big positive to take away from this past season. With this district semi-final victory, it marks two straight years now in which the Blue Wave have won a playoff game.

During this past season, there were some important contributions from numerous players that aided in P.K. Yonge’s success. As the team went through its ups and downs this season, the players never ceased to give their all and make the most out of their opportunities.

One of these bright spots for the Blue Wave was the play of their sophomore quarterback Adrian Curtis. Curtis finished the season with 1,640 passing yards and 17 touchdown passes. He boasted a QBR of 99.4 and averaged 17.8 yards per attempt. Curtis had a very successful season in the stat sheet and likely will continue to be a leader for this P.K. Yonge team next season.

The Blue Wave’s air attack was a big reason for the team being successful in their victories this past season. The leading receivers who compiled the majority of receiving yards for the team were senior wide receiver Deldrick Goston and freshman wideout Hayden Moore. Goston put together a fantastic season, hauling in 33 receptions for 596 yards and 8 touchdowns. However, Moore was not far behind, with 20 receptions for 472 yards and 5 touchdowns.

P.K. Yonge’s leading rusher was senior running back Devin Pedro, who finished the season with 660 yards on the ground to go with 6 rushing touchdowns. Pedro made up over half of the Blue Wave rushing offense and averaged 55 yards per game.

The healthy mix of contributions from senior players and underclassmen throughout the season for the Blue Wave should keep them in contention for their district again next year. P.K. Yonge will be looking to improve and build upon their accomplishments and failures from this past season with the development of these younger players.

Austin Stirling is a second-year journalism major with a sports media focus. He is aspiring for a career in sports media writing/production. Contact him at austinstirlingg@gmail.com
@austinstirlingg
Previous M. Rhule Signs Contract with University of Nebraska
Next Florida Takes the NHL: Panthers and Lightning 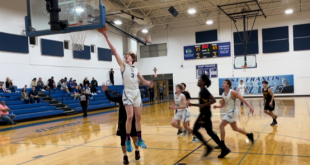 By: Alex Washburn & Regan Staudt The hometown Wolves win 84-39 over Meadowbrook As the …