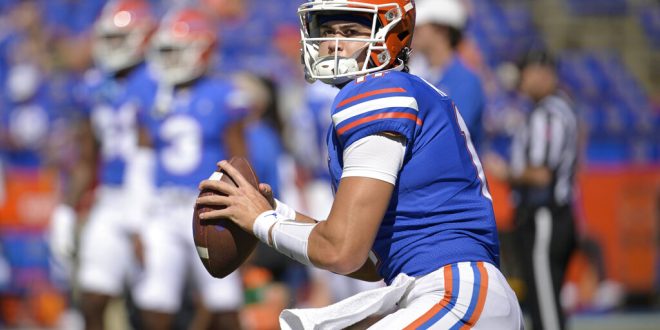 He has been suspended indefinitely from the football program. https://t.co/vZIRNMbDP8

The press release said the investigation was prompted after the Gainesville Police Department received a cyber tip from the National Center for Missing and Exploited Children indicating a Discord user had distributed an image of child sexual abuse material. It was revealed through the investigation the probable Discord account user holder was Kitna. A GPD detective contacted and interviewed Kitna at Kitna’s residence. The quarterback said he remembered sharing the two images but thought they were “legal” because he found them online. However, he said he realized he shouldn’t have shared those two images. His Discord account was later deactivated.

According to a Tampa Bay Times article by Matt Baker, “evidence of possession with intent to promote, according to Florida statute, includes having three or more copies of a video, photograph or other representation.”

The University Athletic Association said the following in a statement regarding Kitna: “We are shocked and saddened to hear of the news involving Jalen Kitna. These are extremely serious charges and the University of Florida and the UAA have zero tolerance for such behavior. Jalen has been suspended indefinitely from the football program.”

Kitna is scheduled to appear in court Thursday morning at Alachua County Courthouse, according to Gators Online.

Kitna committed to the Gators in May of 2020. He is the son of former NFL quarterback Jon Kitna. He made no game appearances in the 2021 season and his collegiate debut was against Eastern Washington as a redshirt freshman on October 2 of this year where he recorded eight completions for 152 yards and a touchdown. In his four game appearances this season, the quarterback completed 10 of his 14 pass attempts for 181 yards.

Kaitlyn Wadulack is a fourth-year journalism student specializing in sports and media at the University of Florida. You can reach Kaitlyn at k.wadulack@ufl.edu
@kwadulack
Previous Buchholz visits Venice in state semifinal
Next Through the Wire: Playoffs?