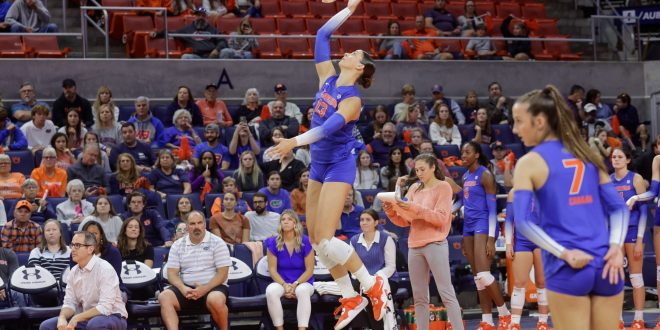 Merritt Beason goes up for a serve in the Gator volleyball team's match against the Auburn Tigers on Wednesday. Photo from @GatorsVB on Twitter.

The Florida volleyball team defeated the Florida A&M Rattlers in three sets to secure a spot in the second round of the NCAA Tournament.

The Gators were led by Gabbi Essix who delivered eight kills and two blocks. Essix shared her thoughts on the team’s mentality going into the game and looking ahead to Saturday’s round two matchup.

The Gators reached set point thanks to a big kill from Marina Markova. A long rally ended in a Gator point to give Florida a 25-15 win in the first set.

The Gators got off to another strong start in the second set. An ace by Emily Canaan followed by an attack error by Florida A&M forced a Rattler timeout down 7-4. Florida A&M had no answer for Florida’s big block.

The Gators wasted no time jumping ahead of the Rattlers. A kill from Victoria put the Gators up 12-3 forcing a Florida A&M timeout. The timeout proved to be no use as Victoria delivered another kill immediately upon returning to the court.

AC Fitzpatrick saw action for the first time in the third set. On her first two plays in, she delivered back-to-back kills. Florida kept all the momentum through the final point, taking a 25-9 victory in set three.

The Gators face Iowa State in round two of the NCAA Tournament Saturday at 7 p.m. The Cyclones defeated Florida Gulf Coast Friday to advance to the second round.