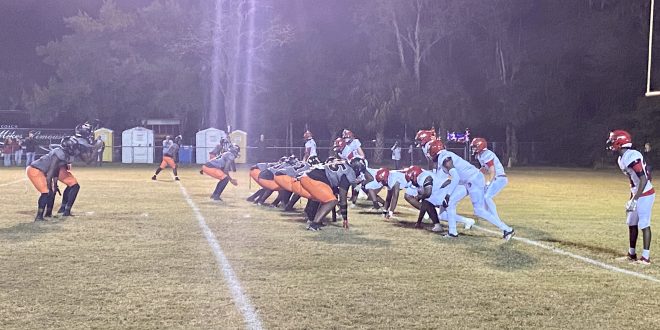 The Hornets are heading to Tallahassee to compete in the FHSAA 1R state championship. They’re able to achieve this feat by shutting out the Blountstown Tigers 28-0 Friday night. This is the Hornets’ third straight year making it to the state title. It was clear from hours before kickoff, to the final whistle that the entire city of Hawthorne had this team’s back. Hornets Head Coach Cornelius Ingram mentions what the support from the community means to this team.

“It’s a different environment. As you can see, it was packed tonight. The energy was in the stadium when we pulled up to warm up. So, this is a special time in our town right now. These kids have done an incredible job all year long. Just doing the right thing, on and off the field, and it’s paying off. We still have one more, but we’re going to enjoy this one tonight.”

Firework celebration after Hawthorne’s win and advancement to the state championship game. pic.twitter.com/nLfSV6Rb9t

Dominance From the Beginning

It was evident from the Tigers’ opening possession that this was going to be a dominant performance from the Hornets. The Hornets opened the scoring in the first quarter with a signature run from their Quarterback CJ Ingram. But, the star for the offense was no doubt Darian Smith-Williams. He is credited with scoring three touchdowns, two on the ground and one came from an incredible 96-yard punt return.

The defense also had a stellar night as well, holding Blountstown to zero points and 104 total yards. A key play in the second quarter was a ball tipped by Jailen Ruth and intercepted by Darian Owens. That play set up the offense for their third touchdown. Ruth is also credited with a safety in that second quarter as well. The star on the defensive side of the ball was Leland Johnson. He was all over the field, making incredible tackles and keeping this Blountstown offense at bay. The game was sealed in the fourth by an interception by Tremain Johnson.

QB CJ Ingram left the game in the second quarter with an ankle injury. He injured the same ankle that has been bothering him for the majority of the season.

Coach Ingram describes how he was able to keep his team focused.

“Once we got into the locker room at halftime, he walked in on his own. So, the team, they were emotionally down. So when he walked in, I made a joke saying ‘Oh you look fine, you’re going to be ready for next week.’ Then you can see the kids relax and take a deep breath. They smiled and laughed.”

It’s on to Tally

Hawthorne is moving on to the FHSAA Class 1R state title, where they will be playing the 13-0 Northview Chiefs. The game will be on December 10 at 7 p.m. in Gene Cox Stadium in Tallahassee. The Hornets look to finally capture that elusive state title. 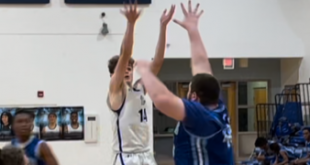