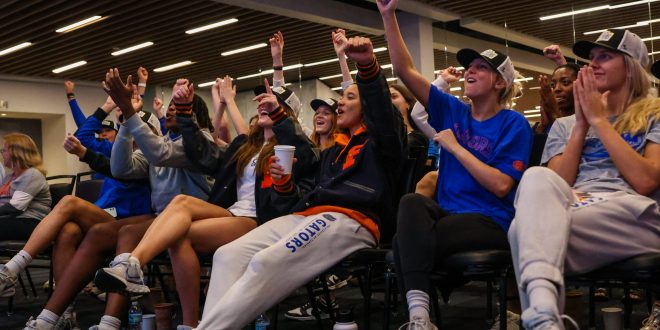 Florida Gators volleyball is back in the NCAA tournament for the 32nd consecutive year and will face the Florida A&M Rattlers in the first round Friday night. UF head coach Mary Wise, who has led the Gators since 1991, is still in search of her first title. The Gators finished the season 23-5 overall and 15-3 in the Southeastern Conference, good enough to split the SEC title with rival Kentucky. In last year’s NCAA tournament, Florida made it to the Round of 16 and lost to the No. 1 Louisville Cardinals.

The Gators saw many key players depart ahead of the 2022 season, including their top-2 leading hitters T’ara Caesar and Thayer Hall. To make up for the loss in production, Florida has relied on the development of sophomores Merritt Beason, Bre Kelley and Gabrielle Essix. Another pleasant surprise has been the emergence of star freshman setter Alexis Stucky. The Wyoming native earned SEC Freshman of the Year after dishing out 10.72 assists per set, second-best in the conference.

Essix and Kelley have combined their forces on the front row to be among the best blocking pairs in the SEC and the nation. Their efforts have helped Florida attain 2.75 blocks per set, tops in the SEC and sixth in the country.

Beason, along with junior Sofia Victoria and senior Marina Markova, have been the core of UF’s offense. Markova, who transferred in from Syracuse, and Beason have put up more than three kills per set each. Victoria’s 261-kill season proves just how many offensive weapons the Gators have to use.

The Rattlers have also had a season to remember, wrapping up 21-12 overall and 15-1 in the Southwest Athletic Conference. Fourth-year head coach Gokhan Yilmaz led his team to their second conference title in program history.

The game against Florida is a rematch of the 2021 NCAA Tournament’s first round. The Gators owned the Rattlers in three sets and ended their season. FAMU has not had much success historically against Florida, as they are 0-12 all-time and have never even won a set.

Where to Watch/Listen to Florida Volleyball

ESPN+ will stream the match, which is scheduled for 7 p.m. at the Stephen C. O’Connell Center. Coverage on WRUF begins at 6:45 p.m.

If the Gators advance to the second round, they will face the winner of the Florida Gulf Coast-Iowa State match scheduled for 4:30 p.m. Friday. The second-round game will be played at 7 p.m. Saturday at the O’Dome.