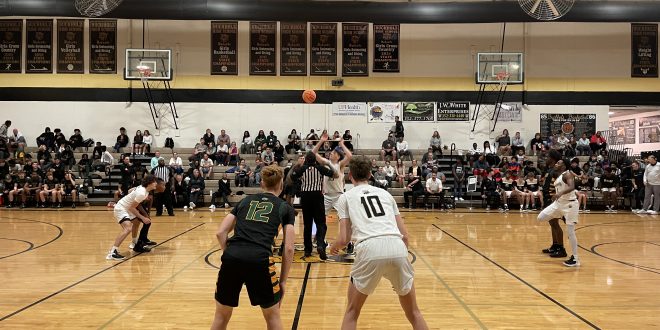 By Shelby Hickman and Rachel Rosen

The Bobcats defeated the Wildcats 68-56 to improve their record to 2-1 on the season.

The tone was set early in this Friday night matchup as both teams came out with ferocious intensity. The Buchholz gym was buzzing with excitement during this action-packed game. Both squads brought the heat to open the first quarter. When one team scored, the other wasn’t far behind with a response. After eight minutes of play, they found themselves in a tight race at 17-15 with Buchholz in front.

The two teams continued to fan the flames in the second quarter. Although they were less efficient on offense, the intensity remained. There was no shortage of physicality as each player was determined to dominate their competition. For much of the first half, both teams were eager to put points on the board as they played fast-paced basketball. After two quarters, the Bobcats held onto their lead and headed to the locker room up 28-23.

Blake McClain passes to Cornelius White inside who uses his physicality to secure two, putting the Bobcats up 19-15. pic.twitter.com/NEEvhhojAE

After reconvening in the locker room, the Bobcats came back onto the court even stronger. Rather than attempting to hastily put points on the board as they did in the first half, they slowed down and improved their offensive efficiency. They continued to play great team basketball by swinging the ball around the arc and taking smarter shots. The Wildcats were unable to adjust to this different style of play and this would ultimately serve as their downfall. After a 23-point fourth quarter, the Bobcats finished off the Wildcats 68-56.

Cornelius White stays with it and finds Blake McClain as he cuts into the paint, putting Buchholz up 43-39. pic.twitter.com/oUhuznvMk2

Gabe Thompson and Nate Muchnick were the Bobcats leading scorers with 17 a piece. Also making an impact for the Bobcats, Ryan Webster finished the night with 12.

Overall, the Bobcats strong teamwork and ability to make adjustments led them to victory. The junior varsity squad was also victorious after defeating Forest 67-53.

The energy in the building is electric as Gabe Thompson hits back-to-back three’s to put the Bobcats up 64-51. pic.twitter.com/7gVaT2TpME

The Bobcats look to improve to 3-1 as they will travel to Fleming Island  on December 6th. Tip off will be at 7:30 PM.