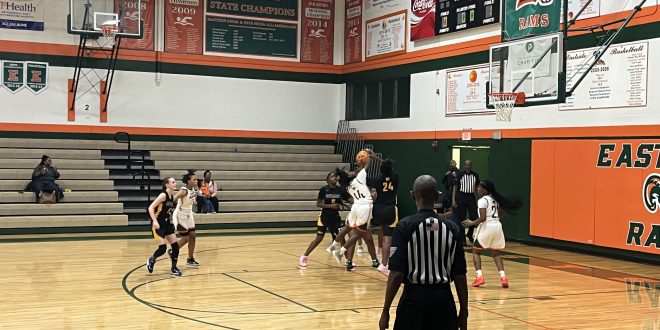 By: Madison Broach and Joseph Baker

The Eastside Varsity girls basketball team took on the Newberry High Panthers Friday night at Eastside High School. The final score was 61-31 in favor of The Lady Panthers. They locked Eastside down in an intense, high-emotion game.

The fast-paced first quarter started with an impressive layup by Kacie Singleton for the Rams. However, Newberry was quick to answer and each team went back and forth for the entire first eight minutes. It was clear that both team’s shots were falling perfectly. Brandy Whitfield was a stand-out for the Panthers with several perfect three-pointers.

Newberry continued to slow the ball down and capitalize on any opportunity. Meanwhile, Eastside was quick with rebounds under their own basket to ensure each possession brought points to the board. Precious Marshall closed the first quarter with a three bringing the score to a tie of 14-14.

It has been a physical and fast-paced game so far. At the end of the first, Eastside and Newberry are tied 14-14.@ESPNGainesville pic.twitter.com/H94CiMVPHt

After ending the first quarter in a tie, it seemed that this would be a close game; however, Newberry quickly ran away with this game. They dominated both ends of the floor and remained composed throughout a scrappy game. Newberry’s defense stepped up their game and Eastside began to rack up the fouls.

There seemed to be a lack of communication by the Rams on defense and the Panthers capitalized on this to double their points. By the end of the half, Eastside had only scored three more points thanks to a three-pointer by Aniya West shortly before the buzzer. The half ended with a score of 28-17 in favor of the Panthers. 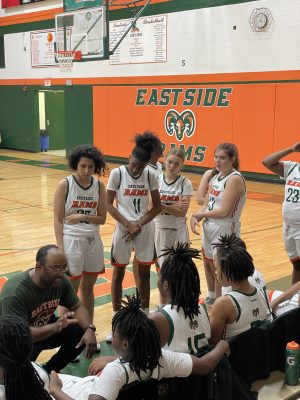 As the second half began, Eastside showed no signs of defeat. They continued to be aggressive; although they were no match for the Panther’s impressive teamwork. Newberry’s scoring was led by the three-headed monster that is guard Sarah Beaulieu, Brandy Whitfield, and Deasia Bryant.

All three finished with double-digit points. Forward Evelyn Guild was also a big contributor. Eastside struggled with several travel calls giving the ball back to the Panthers. The quarter ended with a score of 44-20 and it seemed Newberry was going to be victorious.

The fourth quarter continued to tell the same story. Many Rams were attempting to put points on the board, but it was not going their way. In the meantime, the Newberry offense seemed unstoppable. One impressive three-pointer came from Panther’s player Natreana Akanni as she maneuvered around Ram’s player Eliza Matthias’ impressive defense.

Both teams accumulated many fouls this quarter as neither team was ready to give up possession. The game ended with a score of 61-31 with Newberry clearly outplaying Eastside. 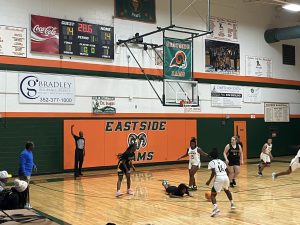 A heated battle comes to an end. Newberry comes out on top, beating Eastside 61-31. The Lady Panthers dominated this game after a tight first quarter. @RowdyEHSRams @ESPNGainesville pic.twitter.com/d98nRP3O4I

The Lady Rams accumulated a lot of whistles and a lot of fouls, but unfortunately not many points. They struggled to score after the first quarter, as they combined for a total of 17 points in the final three quarters. Shooting guard Aniya West was the only Ram that finished with double figures.

Precious Marshall also played well, but her shots just weren’t falling. Newberry looked fantastic tonight, and they will look to carry this momentum into their next game against Santa Fe. Even though Eastside lost, they showed signs of promise and no signs of giving up any time soon. They will look to bounce back against Fort White on Saturday.