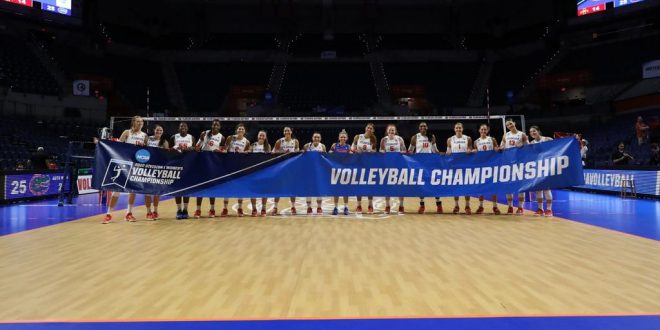 The Florida Gators volleyball team dominated the Iowa State Cyclones in three straight sets on Saturday night to punch their ticket into regionals.

Merritt Beason and Marina Markova led the team in kills, each putting up 12. Sofia Victoria trailed closely behind with eight kills and Alexis Stucky delivered five herself. Elli McKissock added 17 more digs onto her already accomplished season, followed by Beason with 11. Emily Canaan posted 10 of her own, Trinity Adams posted eight, and Stucky had five.

Great Start For the Gators

The Gators started the first set in an electric atmosphere, and they were definitely on their A-game. Bre Kelley delivered a kill early in the set, followed directly after by a kill from Beason. Florida continued to play tough, forcing Iowa State to take their first timeout with the Gators up 8-3. Iowa managed to score a few points coming out of the timeout, but Markova was quick to shut their efforts down with a kill.

After Markova’s kill, Florida went on to score five straight points, forcing the Cyclones to take their final timeout of the set with the score 15-7 in Florida’s favor. Iowa State attempted to close the gap, but it was no use. The Cyclones’ downfall was their errors, combined with the wall that met them at the net.

The Gators continued to pull ahead, and Stucky delivered the final point of the set to make the score 25-19 for the Gators.

After some adjustments, Victoria served up a massive kill leading to a challenge. Florida kept the point, bringing the score to 8-10 Iowa State. Shortly after, the point that would have tied the game at 10 points was challenged. The result was overturned, giving the Cyclones back the lead. From that moment on, the Gators managed to keep it a close game.

Florida tied the set up for the first time and it quickly became a back-and-forth scoring battle. The Gators took their first lead of the set at 21-20 but still battled with the Cyclones to keep that lead. Florida and Iowa State called back-to-back timeouts as they crept closer to the end of the set, but the Gators managed to pull out the last point with a final score of 25-23.

The Gators wasted zero time putting up some points at the beginning of the third set. They continued to be a force, pulling away from the Cyclones slowly but surely. A huge block from Beason forced Iowa State to take their first timeout of the set at 11-5. The break in play didn’t slow the Gators down as they continued to put up point after point.

The Cyclones took their second timeout only a few points later at 14-6 to talk strategy, but it wasn’t enough. Florida went up by as many as 11 points at one point, following a kill from Beason. Florida continued to dominate the third set, taking their first timeout at 18-10.

Coming out of the timeout, the Gators continued their reign. They drove the score all the way up to 24-14, where Beason delivered the final kill to end the set and the game.

The Gators will soon be heading to the regional round of the NCAA Tournament. Head coach Mary Wise spoke after the game and shared her thoughts on making it to the tournament for the 29th time.

“Any win in the NCAA Tournament is a huge accomplishment,” Wise said. “We appreciate the fact that we have been able to do it so many times before, but we will never, ever take it for granted.”