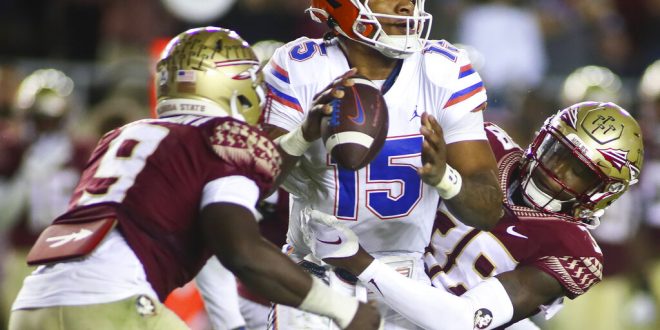 Richardson announced he would be entering the draft this spring despite only being a sophomore. After his first season as the starting quarterback, Richardson, a potential first-round pick according to CBS Sports, led the Gators to a record of 6-6 this year. He threw for 2,549 yards, had 17 touchdowns and nine interceptions.

Richardson also rushed for 654 yards and added nine more rushing scores. His best game came against Utah in the first matchup of the season. The Gators beat No. 7 Utah 29-26 and he rushed for three touchdowns.

Richardson started his football career at Eastside High School and redshirted his first year with the Gators. Then, he saw occasional playing time in 2021, taking over for Emory Jones before suffering an injury.

Torrence also declared for the NFL Draft after playing one year with the Gators and is projected to be a first-round pick. He was one of two players who came over from Louisiana with Head Coach Billy Napier. The Gators were terrific at running the ball this year. They had three players rush for at least 650 yards, led by Montrell Johnson Jr. with 871. Florida also averaged over 200 yards per game on the ground and had 29 rushing touchdowns.

Like Richardson, Dexter is only a sophomore but will be heading to the NFL. He recorded 75 tackles and finished his Gator career with 120. Dexter recorded eight tackles against LSU and also had two sacks and an interception this season.

What does this mean?

Dexter will play in the Bowl Game against Oregon State on Dec. 17. Torrence is scheduled to play in the Senior Bowl. The NFL draft is set for April 27-29.