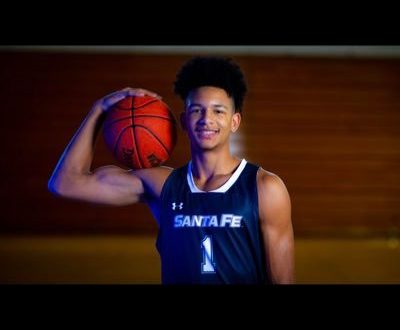 There is a lot that goes into getting to the next level in basketball. It takes countless hours of practice, the desire to be great and oftentimes late nights followed by early mornings. No player knows this better than Nasir Mann. The 6’4 guard from Gainesville, Florida is playing his sophomore season for the Santa Fe Saints men’s basketball team. Mann has played in eight games this season for the Saints and is looking for a breakout year.

Mann grew up locally in Gainesville and attended high school at The Villages. Before that, however, he explained he was originally more focused on baseball. In his years prior to high school, he grew up playing third base and pitching, while making all star teams. He pursued that more seriously than basketball in his early years and said things were “looking good” in terms of playing at the next level.

However, when Mann moved from Gainesville to the Villages, an area just outside of central Gainesville, he ultimately decided to pursue basketball more seriously. His reasoning for the switch was mainly due to the lack of exposure and chances for baseball players in the Villages.

“When I moved down here, I just didn’t get the same opportunities because baseball wasn’t as good”

Once Mann began to focus on basketball, it was clear he had what it took to play in college. He started gaining more and more exposure as he continued to improve his game at the high school level. Mann was talking to several schools coming out of high school and ultimately decided to commit to Santa Fe Community College.

Mann said he did not always plan on going the JUCO route. High school grades sent him down an unlikely path, but he did not let that stop him. When he saw there was a community college program right in his hometown, he said he knew it was the right place to play. Mann is now the starting guard for the Santa Fe Saints and is looking to elevate the team to new heights this season.

Nasir said he has always been exposed to the work it takes to get to the next level in basketball mainly due to his older brother, Tre Mann. Tre Mann is a former Florida Gators standout guard and now plays in the NBA for the Oklahoma City Thunder. Mann expressed Tre Mann played a huge role in helping improve his game when he started taking basketball more seriously. He is also proud of his brother’s success in getting to the NBA.

“It was good, seeing how he went through the process and everything… it just shows that anything’s possible, as a kid coming from an area like this and making it big, it just shows you that the sky’s the limit”

Mann said his relationship with his brother is important to him. He discussed how he and his brother used to always attend workouts together and talk about basketball growing up. Mann also mentioned, while he and his brother are close now, it was not always that way for them.

“Growing up we were really close. As he started to take basketball more seriously and I pursued baseball, we kind of split a little bit. While he would go to his workouts, I would go to mine, and he would leave to go to exposure camps.”

The two may drifted apart in their early years, but things changed once the younger brother started high school and switched to basketball as his primary sport. He explained once he began playing more basketball in high school, the two were brought back together again.

“[Tre] would always share knowledge with me here and there,” he said.

Enjoyed The Thunder game tonight with My Boys. #HappyDad# pic.twitter.com/R431beu130

Mann also grew up around other well known athletes from the Gainesville area, such as Anthony Richardson. Richardson was the starting quarterback of the 2022 Florida Gators and has declared for the 2023 NFL draft. He was spotted supporting Mann at Santa Fe’s home opener against PHS Academy earlier this season.

When asked about what it meant to have the opportunity to play in front of people he knew growing up, Mann expressed “It feels really good. You feel like a better connection … I can go out and represent for the city.”

Mann has come a long way since coming to Santa Fe as a freshman last year. The biggest difference from last season coming into this one: becoming a starter for the team.

“Last year coming off the bench as a freshman… my main role was to come in and hit shots… This year, I’m getting more of an opportunity to come off screens, push the ball in transition and shoot more shots. It takes a lot of work to move up like that.”

Mann continues to put in the work and has made the most of his increased opportunities. He said he “had a little bit of a slow start to the season, but now everything is coming into play.”

Despite his start, Mann is averaging 12.5 points per game to go along with 6.4 rebounds. He is also shooting an extremely efficient 45.2% from three-point range.

Mann has played a crucial role in helping the Saints to their current 6-3 record on the season. They currently sit on a three-game winning streak and are looking to extend it against Hillsborough Community College. The Saints are a team that experienced a lot of success last year and are looking to go above and beyond that this season.

“The mindset is to just get better every single day and be a better player than you were yesterday. We don’t compare ourselves to anybody… we want to repeat as conference champs.”

Both Nasir Mann and the Saints have high aspirations for this season and are determined to put in the work to achieve them.

A big double-double and a team-high 23 points from Nasir Mann led the way for the Saints, and SF came back from a second-half deficit to pick up the win at Central Georgia Tech! pic.twitter.com/SqpVku04t9

Mann said he was unsure of his future plans following this season with Santa Fe. He mentioned he was speaking to a few schools, but nothing was set in stone at the moment. He said his current focus, though, is this season and team, and he would think more about his future as the season comes to a close.

Austin Stirling is a second-year journalism major with a sports media focus. He is aspiring for a career in sports media writing/production. Contact him at austinstirlingg@gmail.com
@austinstirlingg
Previous Brittney Griner Freed From Russian Custody
Next Through the Wire: Championship Prep