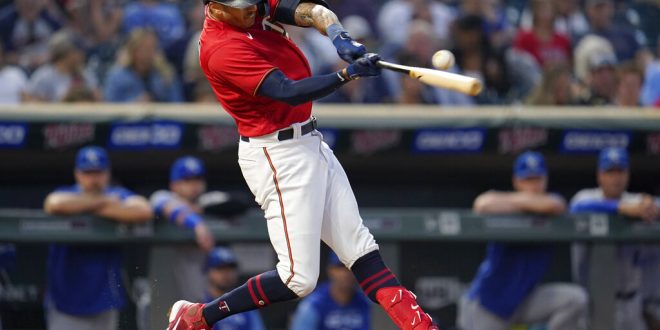 FILE - Minnesota Twins' Carlos Correa hits an RBI double during the third inning of a baseball game against the Kansas City Royals, Tuesday, Sept. 13, 2022, in Minneapolis. In a wild twist overnight, Carlos Correa agreed to a $315 million, 12-year contract with the free-spending New York Mets after his pending deal with the San Francisco Giants came apart over an issue with his physical. (AP Photo/Abbie Parr, File)

At the very least, Carlos Correa’s free agency saga resulted in a historical footnote: the infielder became the first player in Major League Baseball’s history to sign two $300 million+ contracts within a week.

This morning, Correa signed a 12-year, $315 million contract with the New York Mets.

In a stunning turn, Carlos Correa has agreed on a 12-year, $315 million contract with the Mets, voiding a previous 13-year agreement with the Giants, a source confirmed to ESPN Wednesday morning.

The Puerto Rican star had previously signed a 12-year, $350 million contract with the San Francisco Giants last week. However, Correa reportedly failed his physical, prompting the Giants to void the deal.

“While we are prohibited from disclosing confidential medical information, as Scott Boras stated publicly, there was a difference of opinion over the results of Carlos’ physical examination. We wish Carlos the best,” said Zaidi.

Correa was able to quickly sign a deal with the Mets, who pounced on the star infielder.

“In the end, what the (heck’s) the difference? If you’re trying to make a move, you make the move,” said Mets owner Steve Cohen to the New York Post. “This puts us over the top.”

Last season, Correa accumulated 5.4 WAR with the Minnesota Twins after a 7-year start to his career with the Astros. The 2015 rookie of the year and two-time all-star is a career .279 hitter with 553 RBI in 888 games played.

Correa’s signing will push the Mets farther into their position as the highest-spending team in baseball. The Mets have already committed over $800 on free agents this Winter.

This also likely transitions Correa to third base. Correa stated previously that he would shift to third if it meant he could play next to Puerto Rico teammate Francisco Lindor, the Met’s current shortstop.

Connor O'Bryan is a world soccer reporter for ESPN Gainesville. He also sometimes covers baseball and other sports. He has previously written for WUFT Gainesville and for Atrium Magazine. Connor also cohosts the "Off The Bar Podcast", a student driven podcast that focuses on the global soccer landscape.
@ConnorOBryan3
Previous Gator Football Signs 22 During Early Signing Period
Next Bucs Inch Towards Playoffs With OT Win