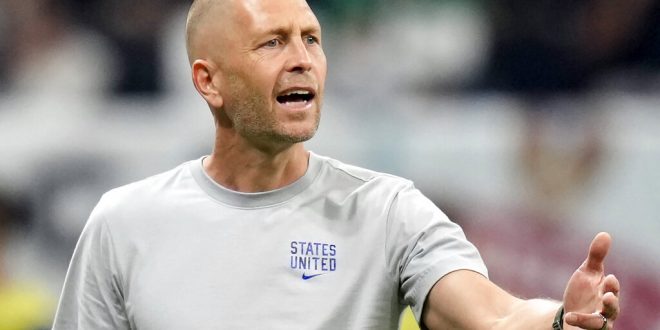 FILE - United States head coach Gregg Berhalter follows the game during the World Cup group B soccer match between England and The United States, at the Al Bayt Stadium in Al Khor, Qatar, Friday, Nov. 25, 2022. The U.S. Soccer Federation revealed Tuesday, Jan. 3, 2023 it is investigating that men's national team cach Gregg Berhalter said was a 1991 confrontation in which he kicked the woman who later became his wife.(AP Photo/Andre Penner, File)

Danielle and Claudio Reyna confirmed that they reported United States head coach Gregg Berhalter to the United States Soccer Federation, per statements given by the couple to The Athletic.

From @TheAthletic: Information given to U.S. Soccer regarding an incident involving coach Gregg Berhalter and his wife originated from Gio Reyna's mother. The saga adds to recent friction between the Reynas and Berhalter that began at the World Cup. https://t.co/phWC8Pyt4a pic.twitter.com/BW87nMOkFo

They are also lifelong friends of the Berhalter family. Claudio and Gregg have known each other since childhood. They played soccer together from the youth level all the way through national team soccer. Danielle played college soccer with Rosalind Berhalter and the two were roommates. Gregg has known Giovanni almost his entire life. Until recently, the two families have had a solid friendship.

Qatar is where things splintered. Giovanni was benched following a lack of effort in training. Berhalter made the forward apologize to the team, but Giovanni still only played 52 total minutes at the World Cup.

On December 11th, information emerged that Berhalter, speaking at a leadership summit, said that a player was “clearly not meeting expectations on and off the field.” In an Instagram post, Giovanni later confirmed that this statement was about him, and expressed frustration over the dispute’s coverage and his perceived role.

Gio Reyna issues a statement after reports of him almost being sent home from the #FIFAWorldCup surface.#USMNT pic.twitter.com/kZg1aIDgCH

“To set the record straight, I did call Earnie Stewart on December 11, just after the news broke that Gregg had made negative statements about my son Gio at a leadership conference,” said Danielle Reyna in her statement.

“I have known Earnie for years and consider him to be a close friend. I wanted to let him know that I was absolutely outraged and devasted that Gio had been put in such a terrible position and that I felt very personally betrayed by the actions of someone my family had considered a friend for decades.”

“As part of that conversation, I told Earnie that I thought it was especially unfair that Gio, who had apologized for acting immaturely about his playing time, was still being dragged through the mud when Gregg had asked for and received forgiveness for doing something so much worse at the same age. Without going into detail, the statements from yesterday significantly minimize the abuse on the night in question. Rosalind Berhalter was my roommate, teammate and best friend, and I supported her through the trauma that followed. It took a long time for me to forgive and accept Gregg afterward, but I worked hard to give him grace, and ultimately made both of them and their kids a huge part of my family’s life. I would have wanted and expected him to give the same grace to Gio. This is why the current situation is so very hurtful and hard.”

“At the time I called Earnie, many people were trashing Gio on social media due to Gregg’s comments, and I didn’t know when or if this would stop. I just wanted Earnie to help make sure that there would be no further unwarranted attacks on my son. I thought our conversation would remain in confidence, and it didn’t occur to me at the time that anything I said could lead to an investigation. I’m not criticizing Earnie here.”

Per ESPN’s Jeff Carlisle and Kyle Bonagura, Claudio Reyna sent repeated messages to both Stewart and USMNT General Manager Brian McBride. In these messages, Claudio expressed frustration over his son’s experience in Qatar. Multiple sources told ESPN that Reyna threatened sharing allegations about Berhalter’s past, which Reyna denied in his own statement.

“I support my wife, Danielle, and her statement. I too was upset by Gregg’s comments about Gio after the U.S. was out of the World Cup, and I also appealed to Earnie Stewart on December 11 asking him to prevent any additional comments,” said Claudio Reyna in his statement.

“While in Qatar, I shared my frustrations about my son’s World Cup experience with a number of close friends, Earnie and Brian McBride among them. However, at no time did I ever threaten anyone, nor would I ever do so.”

Following uncertainty surrounding Berhalter, Anthony Hudson has been named interim head coach of the USMNT. Hudson will spearhead January’s international camp. He will lead the team for late January friendlies against Serbia and Colombia.

Hudson was one of Berhalter’s assistant coaches. He previously coached Colorado Rapids and the New Zealand national team, as well as the United States U20 squad.

Someone lost in this story is Rosalind Berhalter. Family friends threw one of the most traumatic events of her life into the public eye over’s their son’s lack of playing time.

Rosalind is a victim of assault. This story should be about her. There should not have even been a story if she did not want this information to get out, which seems apparent.

Instead, Rosalind has completely lost her agency and privacy, all for the sake of a disgruntled family going to war.

Connor O'Bryan is a world soccer reporter for ESPN Gainesville. He also sometimes covers baseball and other sports. He has previously written for WUFT Gainesville and for Atrium Magazine. Connor also cohosts the "Off The Bar Podcast", a student driven podcast that focuses on the global soccer landscape.
@ConnorOBryan3
Previous USMNT Head Coach Gregg Berhalter Under Investigation For Misconduct
Next Gator Men’s Basketball Drops Home Game to Aggies