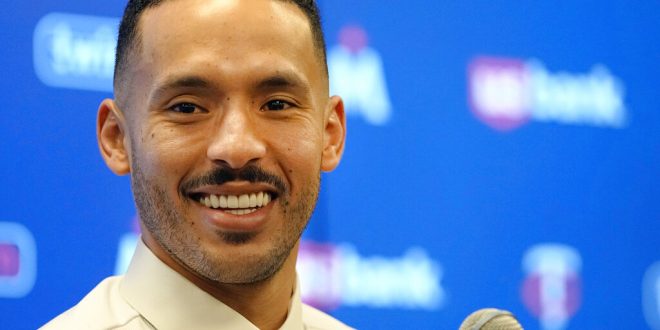 Minnesota Twins' Carlos Correa speaks to the media during a baseball press conference at Target Field Wednesday, Jan. 11, 2023, in Minneapolis. The team and Correa agreed to a six-year, $200 million contract. (AP Photo/Abbie Parr)

The Carlos Correa roller coaster ride seems to have finally come to an end. Correa agreed to a six-year deal with the Minnesota Twins worth $200 million on Tuesday. The deal became official after Correa passed his physical on Wednesday. This comes after he reportedly agreed to deals with the San Francisco Giants and New York Mets. However, both deals fell through after concerns with his physical results.

Carlos Correa's deal with the Twins is official, per @Ken_Rosenthal pic.twitter.com/0qXTYjqSYV

Correa’s timeline as a free agent has been nothing short of confusing to MLB teams and fans. On Nov. 7, he opted out of his deal with the Twins and hit free agency, bringing attention from numerous big market teams in the league.

After a little over a month, it was reported that he agreed to a 13-year deal with the San Francisco Giants that was worth $350 million. Shortly after, the Giants said that he failed his physical and they backed out of the deal. Then, on Dec. 21, Correa would set his sights on Queens and agree to a 12-year deal with the New York Mets worth $315 million. Yet again, his physical results posed some concerns with the Mets front office and the deal fell through. But on Tuesday, he officially returned to the Twins on a six-year deal worth $200 million.

The Twins decided to give Correa a short term deal due to his health concerns. According to ESPN’s Jeff Passan, it was the main reason the Giants and Mets failed to officially sign the shortstop.

First Season With The Twins

Correa has played only one season so far with the Twins. He played 136 games, accumulating a .291 batting average and hitting 22 home runs. He signed with the Twins after playing with the Houston Astros for seven seasons, which included a World Series victory. Correa and Minnesota had mutual interest in a reunion after he had a solid 2022 season. He is a crucial piece for the team’s future if they hope to make deep playoff runs.