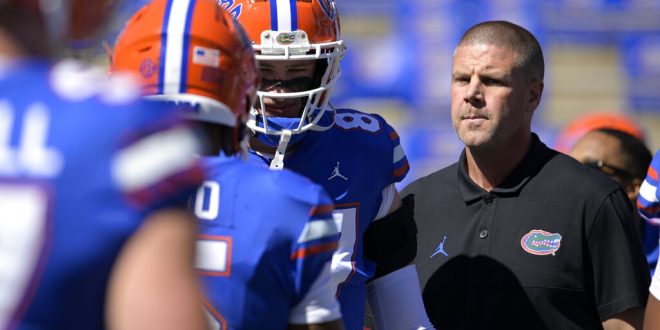 One chaotic side of college sports will be taking a brief hiatus.

The winter NCAA transfer portal window closed on Wednesday since opening on Dec. 5. Wednesday was the final day for athletes to enter their name in the portal. The next transfer portal period will begin on May 1 and run through May 15.

As Billy Napier looks to build a sustainable program in Gainesville, his second roster at Florida will look nothing like the one from his first season. The Gators lost 24 scholarship players to transfer this season, including nine with starting experience. Offensive linemen Michael Tarquin (USC), Joshua Braun (Arkansas) and Ethan White will play at new schools, next season.

Additionally, defensive backs Donovan McMillan (Pitt), Tre’Vez Johnson (Missouri) and Avery Helm (TCU) were expected to contribute heavily in 2023. However, they will contribute at other programs next season.

Overall, 21 of the 24 transfers have announced their destinations. White, wide receiver Daejon Reynolds and defensive lineman Chris Thomas Jr. are the only former Gators to not announce their portal destination.

Napier and his staff did look to the portal to fill holes left by outgoing transfers and misses on the recruiting trail. On Dec. 11, Louisville defensive lineman Caleb Banks became the first to announce his commitment to Florida.

After losing Anthony Richardson to the NFL, the Gators turned to the transfer portal for depth and competition at the quarterback position. In stepped former Wisconsin starter Graham Mertz, who will likely be the starter for the 2023 season after Jaden Rashada’s request to be released from his letter of intent.

The Gators lost another major contributor to the NFL in All-American offensive lineman O’Cyrus Torrence. Florida brought in Baylor transfer Micah Mazzccua, who was PFF’s No. 2-ranked guard behind Torrence.

Rounding out the Gators’ current portal additions are linebackers Deuce Spurlock (from Michigan) and Teradja Mitchell (from Ohio State) and defensive lineman Cam’Ron Jackson (from Memphis).

This past season, the NCAA announced new rules in regards to one-time transfers, coaches’ firings and timings of transfers.

Less than a week ago, the NCAA announced another rule, which stated that undergraduate players who enter their name into the portal a second time must meet specific criteria to gain immediate eligibility. The only exceptions to this rule are if a player transfers due to a mental or physical health issue. Additionally, the NCAA will consider “exigent circumstances” that caused an athlete to transfer.

Cam is a fourth-year broadcast journalism sports and media major at the University of Florida. In addition to writing and recording radio trendings for WRUF, Cam covers North Florida HS football for The Prep Zone and Mainstreet Daily News and UF football and basketball for Inside the Gators.
Previous From Student Rec to Exactech: Walk-On Paige Clausen Finds Herself Apart of Gator Women’s Basketball
Next Lightning Drown Canucks 5-2 as Stamkos Scores 500th Goal