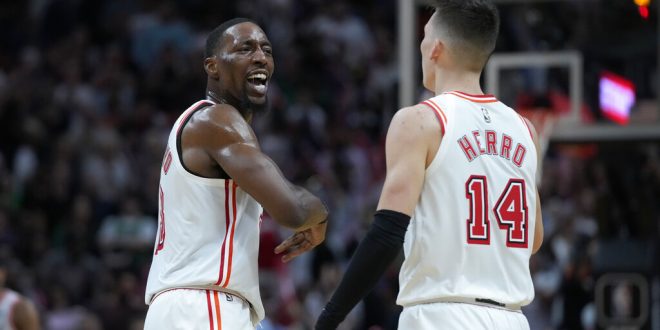 Miami Heat center Bam Adebayo, left, celebrates with guard Tyler Herro (14) after a play during the second half of an NBA basketball game against the Boston Celtics, Tuesday, Jan. 24, 2023, in Miami. (AP Photo/Wilfredo Lee)

The Miami Heat and Boston Celtics faced off Tuesday night in the newly-named Miami-Dade Arena. The Heat (27-22) served the Celtics (35-14) their second straight loss, taking them down 98-95.

Key Injuries For the Visitors

The Celtics were without three of their five starters: Jaylen Brown, Marcus Smart and Al Horford.

Each of these key players were listed on the team’s injury report for the game. Brown was ruled out for adductor injury management, Smart for his sprained ankle and Horford for lower back stiffness.

The greatest point differential between the two teams in the first quarter was four. Miami’s Max Strus came out striking with a 13-point quarter to keep it close.

Celtics star Jayson Tatum, however, was able to match Strus’ quarter with 13 points of his own.

Boston put up 28 points to Miami’s 18 in the second quarter to give them a 58-50 lead at the half.  Six of the Celtics’ final eight points before intermission came from Tatum, who finished the half with 21.

After a close third quarter (Heat 25, Celtics 24), Miami was down seven going into the final 12 minutes.

In the final seconds, with the Heat up 97-95, Tyler Herro forced a Tatum turnover, which would be the game’s deciding factor.

Key Performances for the Heat

Haywood Highsmith and Victor Oladipo combined for 27 points off the bench. Highsmith put up 15 points and 10 rebounds on 4/4 from three, while Oladipo contributed 12 points and 6 rebounds himself.

The Heat will seek their third consecutive win Friday night when they host the Magic at 8.

The Celtics will look to bounce back from their two game losing streak Thursday evening against the Knicks at 7:30.

Rachel Rosen is a sophomore at the University of Florida studying journalism with a specialization in sports and media.
Previous Shelton’s Australian Open Run Ends
Next Gator Men’s Hoops Host South Carolina