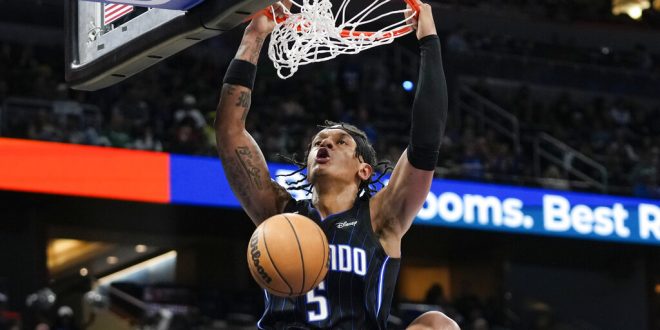 Orlando Magic's Paolo Banchero makes an uncontested dunk against the Boston Celtics during the second half of an NBA basketball game, Monday, Jan. 23, 2023, in Orlando, Fla. (AP Photo/John Raoux)

With their victory over the NBA-best 35-13 Boston Celtics Monday night, the 18-29 Orlando Magic are now 3-1 against the reigning Eastern Conference champs this season.

Despite Jaylen Brown and Jayson Tatum combining for 52 points, the Magic managed to pull away with a stellar second half and eventually win the ballgame, 113-98.

Paolo Banchero led the home-team with 23 points, 5 rebounds and 2 assists. Wendell Carter Jr. chipped in with a double-double, racking up 21 points and 11 rebounds.

Monday night also marked the season debut of Jonathan Isaac for Orlando. The now-25-year-old forward out of Florida State University had not played since Aug. 2, 2020, when he tore his ACL against the Sacramento Kings in the NBA’s COVID bubble. He proceeded to miss 211 consecutive games, including the entire 2020-21 and 2021-22 seasons, before making his long-awaited return. Isaac finished with 10 points, 3 rebounds and 2 steals in just 10 minutes of play.

The Magic got hot right away, going on an 11-3 run in the blink of an eye. And while the Celtics were able to fight their way back into the game, a nine-point quarter from Cole Anthony helped Orlando maintain a 30-23 lead at the end of the first quarter.

The Celtics found a groove in the second, however. After struggling early on, Tatum put up 12 points in the second quarter alone to give Boston the lead. Banchero would go on to give Orlando the lead back, though, with a jumper to close the half. The Magic led by one, 55-54, at the break.

Boston quickly regained the lead once more after coming out of the intermission with a three-pointer from Derrick White. The game continued to be a tight back-and-forth for the next four minutes or so, with the Celtics narrowly staying ahead.

With about eight minutes remaining in the third quarter, an huge block from Markelle Fultz on Tatum gave the Magic the boost they needed.

Isaac knocked down his first three of the game to give Orlando a 71-68 lead with 6:02 left in the third quarter. And from there, the Magic never looked back.

They proceeded to go on a 15-5 run, which was capped off with a nearly perfect sequence by Isaac. He knocked down a three and, on the next possession, got the steal on Brown that turned into Banchero’s monstrous fast-break dunk.

While the Celtics were able to make it close at one point in the fourth, about midway through the quarter, Orlando never surrendered their lead. A pair of threes from Banchero and Franz Wagner helped them extend it back to double digits. They held Boston to just three points in the last six minutes of play.

What’s Next For the Magic

The Magic will be back in action Wednesday night at 7. They’ll be hosting the Indiana Pacers and looking to put together back-to-back wins.

Jack Meyer is a second-year student at the University of Florida. He is majoring in Journalism and specializing in Sports and Media.
@jackmeyerespn
Previous PK YONGE DOMINATES IN BLOWOUT AGAINST BRADFORD
Next Shelton to Take on Fellow American in Australian Open Quarterfinals