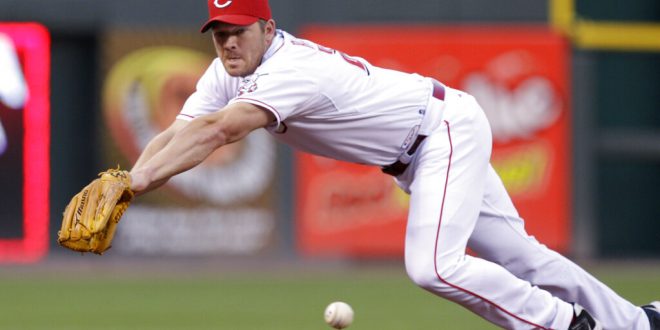 Former MLB third baseman Scott Rolen joined elite company Tuesday night, being elected into the Baseball Hall of Fame. He joins legendary first baseman Fred McGriff as the only other member of the 2023 Hall of Fame class. Rolen was best known for being one of the most elite fielding third baseman the game has ever seen. He was elected in by members of the Baseball Writers Association of America (BBWAA). He received 76.3 percent of the vote, surpassing the 75 percent mark required to get in.

Scott Rolen, whose pristine glovework at third base set the modern standard for defensive brilliance and whose bat was a font of consistency across 17 seasons, has been elected to the National Baseball Hall of Fame by the BBWAA. He'll join Fred McGriff in the Class of 2023.

Rolen played 17 seasons in the big league’s with five different ballclubs. He spent the majority of his career with the Philadelphia Phillies and St. Louis Cardinals and played in 2,038 games. He maintained a career batting average of .281 to go along with 316 home runs and 1,287 RBI. In his 17 years, his batting average dipped below .250 just three times, all in seasons where Rolen played less than 100 games. At the conclusion of his career, Rolen boasted a WAR of 70.1. That number is good for ninth-best all time among third baseman.

While Rolen was a remarkably consistent hitter throughout his career, he was widely praised for his defensive play. He is an eight-time Gold Glove winner and posted a career defensive WAR of 21.2. Additionally, he was responsible for 114 defensive runs saved (DRS) from 2003 to 2012, when he retired. Many have credited him with helping set the gold standard when it comes to to playing infield in today’s game.

During his time on the Cardinals in 2006, Rolen was able to help lead his team to a World Series championship. He posted 154 hits during that season, including 22 home runs and 95 RBI.

Scott Rolen and his family after finding out he’s going to the Hall of Fame.

First baseman Fred McGriff became the only other member elected into the 2023 Hall of Fame class in December. McGriff played 19 seasons for six different ballclubs in the majors. The Tampa native posted a career batting average of .284 to go along with an impressive 493 home runs and 1,550 RBI. He surpassed the 30 home run mark in 10 seasons, earning a reputation as one of the scariest power hitters in the game. Despite never being able to hit 40 home runs in one season, his consistent power led to his staggering career home run total.

Although he bounced around teams throughout his career, McGriff continued to produce offensively for any team he played for. He was traded five times and was an MVP candidate for multiple teams. Late in his career, he was able to maintain this production, hitting 30 home runs with 103 RBI in his final full season of playing.

In 1995, McGriff was able to win a World Series title with the Atlanta Braves in a year where he batted .280 with 27 home runs and 93 RBI. The 1995 Braves team consisted of multiple legendary players including third baseman Chipper Jones and starting pitching duo John Smoltz and Greg Maddux.

It doesn't matter how many years it takes for that phone to ring, receiving the call to the @baseballhall is a life-changing moment.

In this years two-player Hall of Fame class, each was elected in different fashion. While Rolen was elected by the BBWAA, McGriff was elected by unanimous decision by the Contemporary Era Committee. The Contemporary Era Committee deals with players who played from 1980 to the present. The Era Committees is responsible for considering retired players who are no longer eligible for election from the BBWAA. The BBWAA is an organization made up of more than 700 baseball writers who vote on which players should be elected to the Hall of Fame every year. Players require 75 percent of the associations vote in order to be elected.

Despite their different routes to Cooperstown, both players have achieved the the highest honor an MLB player can reach, and will live on in baseball history forever.

Austin Stirling is a second-year journalism major with a sports media focus. He is aspiring for a career in sports media writing/production. Contact him at austinstirlingg@gmail.com
@austinstirlingg
Previous St. Francis Win in Blowout
Next Maisie Filler Invited to Augusta National Women’s Amateur