While sporting a green tie, Tebow was officially introduced Monday afternoon as the newest member of the New York Jets. Tebow stepped up to the podium addressing members of the media in the Jets field house, answering roughly around 35 questions in a span of 32 minutes.

Unaccompanied by any of New York’s coaches, public relations members or executives, Tebow was left to fend for himself. He addressed the media with a quick opening statement thanking his previous team [Denver Broncos] and then proceeded to open the floor for questions.

In the span of a half hour, Tebow was asked an wide spectrum of questions. They ranged from asking Tebow how he felt about being a Jet, why he chose New York over his hometown Jacksonville, his relationship with Jets starting quarterback Mark Sanchez, all the way to what his core beliefs are in his Christian faith.

After facing a gauntlet of questions, Tebow managed, as always, to keep a smile on his face and answer with a joyful laugh. The reoccurring message the young QB kept getting across was he is “excited to be a Jet” and followed with its [New York] where he wants to be. He also shared his hope and goal “to make the team a little bit better,” all the while having the mindset Sanchez and he “are going to have a great working relationship and…have a lot of fun together.”

No one really knows how this trade will work out, but Tebow’s mindset is positive as usual. Tim says he can’t worry about what he cannot control, “ultimately, I’m just going to be myself and just have fun with it.” Only time will tell how just how much Tim Tebow’s presence will affect the team, both on the field and in the locker room. 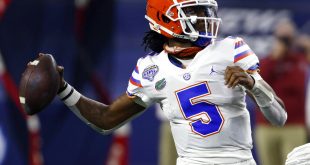 The Florida Gators beat the Samford Bulldogs, 70-52, in a game predicted to be much …