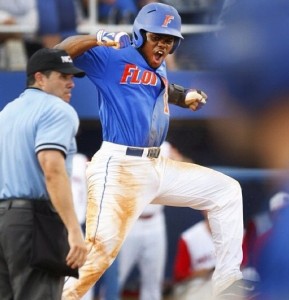 The Florida Gators baseball team is in full preparation for the 2013 season as the team took the diamond for their first official practice of the season Friday afternoon at McKethan Stadium.

Despite the fact the Gators lost an extremely talented group of players, the Florida falls among the best college baseball teams in the country according to several preseason polls.  Florida is ranked No. 7 by Perfect Game, No. 13 by USA Today, No. 17 by Baseball America, and No. 24 by Collegiate Baseball.  Along with Florida, seven other SEC programs made the Baseball America poll including Vanderbilt (2), Arkansas (3), Mississippi State (5), South Carolina (7), LSU (10), Kentucky (11), and Ole Miss (13).

Arguably the biggest loss to Florida was catcher Mike Zunino, who was drafted by the Seattle Mariners in the 2012 draft as the third overall pick.  Taking the starting role as catcher will be sophomore Taylor Gushue, who graduated high school a semester early last year to come play for the Gators.  In last year’s season opener against Cal State Fullerton, Gushue hit a home run off the first pitch he saw as a collegian.  Gator coach Kevin O’Sullivan is confident in Gushue’s ability this season.

Another big loss for Florida is shortstop Nolan Fontana, who was drafted by the Houston Astros in the 2nd round of the 2012 draft. Stepping in for Fontana will be freshman Richie Martin.  Not only will Martin be in Fontana’s defensive spot, but he will also be taking his offensive spot as the lead off batter.

A few recent surprise changes were made to the roster including the loss of redshirt senior outfielder Tyler Thompson.  Thompson earned a medical redshirt last season after he tore his ACL in their SEC opener where Florida swept Vanderbilt.  The injury happened to be the second time he tore his ACL, the first being in high school in the same knee.  However, the history of injuries did not seem to be the reason for the loss of this talented outfielder.

Another surprise to this season’s roster was the addition of freshman outfielder Raphael Andrades, who also plays wide receiver on the Gators football team.  Andrades was actually selected in the 36th round of the 2012 MLB Draft by the Kansas City Royals.  Andrades began practicing with the baseball team just recently and is now on the official roster.

The regular season begins under the lights of McKethan Stadium on Friday, February 15th where Florida plays host to the Blue Devils of Duke.