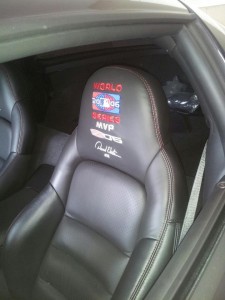 Former University of Florida baseball second baseman and two-time World Series Champion David Eckstein always knew he wanted to be a Gator. His desire to play for Florida was unwavering.

“I did get an offer from another school to get a full ride but said no because I wanted to be a Gator,” said Eckstein.

Eckstein flourished at Florida, scoring 222 career runs and 23 career homers. Eckstein was inducted into the University of Florida Athletic Hall of Fame in 2007. After his career at Florida, he was drafted in the 19th round by the Boston Red Sox. Three years later, the Los Angeles Angels of Anaheim asked him to join their Triple-A Club. The following year he was invited to Spring Training with The Angels, and got to start as a Major Leaguer on Opening Day.

“It was pretty amazing because going into that Spring Training, no one really knew who I was, and if it wasn’t for Adam Kennedy breaking his hand I would’ve never had that opportunity,” said Eckstein.

One of the hardest things Eckstein had to do in the 2001 season was move from second base to shortstop. Eckstein had only played the position for just 23 games in the minors.

“You were willing to do whatever it took to stay in the Big Leagues, and so I was willing to do anything. Looking back on it now it was probably crazy. The hardest part for me was turning a double play because now I saw these runners coming at me. When you’re at second you just feel them,” said Eckstein.

In Eckstein’s next season, the Angels made the 2002 World Series after a slow start. The Angels beat San Francisco- after overcoming a 3-2 series deficit and winning Game Seven of the series 4-1, a moment Eckstein described as “a dream come true.”

Eckstein won his next World Series in 2006 with St. Louis, beating the Detroit Tigers in five games. Eckstein was named MVP of the series.

After the 2010 season in San Diego, injuries caught up with Eckstein, and he wanted to spend more time with his wife, Ashley. Eckstein decided to stop playing at 35 years old.

“If I would’ve gone and played in 2011, her business wouldn’t have been where it’s at. There are so many different factors that ranged in, that it was actually a pretty easy decision,” said Eckstein.

Eckstein hopes to manage a Major League team in the future, but knows he has to be ready to commit a lot of his time to do so. For now, he is enjoying his time with his wife and family in Orlando, Florida.