2014 Florida Gators Baseball: Ready to step up to the plate 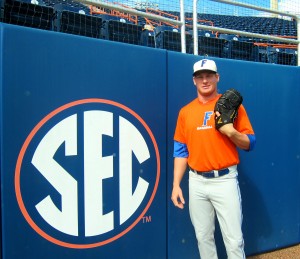 For the Florida baseball team, this upcoming 2014 season is all about a fresh start.

After three straight trips to the College World Series from 2010 to 2012, a national championship series in 2011 and for a time a number one ranking in 2012, the Gators’ 2013 season unfolded in an unusual and disappointing fashion.

Finishing the season with a 29-30 record proved the struggle and the challenges were real indeed.

However, for a program filled with talent, the team is confident that this season will be much better.

“We knew last year was going to be tough for us. Obviously, after coming off such a big year and losing so many big players,” said junior right-handed pitcher Ryan Harris. “But, this year we’re coming off with the mentality of coming back and trying to improve on last season and trying to put that season behind us and not make the same mistakes again that we did last year. It’s really been a lot of motivation for us to come out and be successful this year.”

With 17 new players on the team and no seniors, it is up to the juniors to step up and lead the team as they begin their quest for another trip to Omaha.

Harris will be one of the key players who will need to step up coming out of the bullpen for the Gators. The righty hurler finished last season with a team-leading 37 appearances by a pitcher and the second-lowest ERA on the team.

Along with Harris, the Florida bullpen will try to be stronger, more consistent, and rely on familiarity to reclaim its title as one of the best in the nation.

“The strength for our bullpen is that it’s going to be a little bit older than it was last year- a lot more experienced,” said Harris. “We have guys who might not have played the biggest roles last year but they’ve matured over the summer. We have a bunch of young freshmen too that are going to come in. We’re trying to get them matured as fast as possible and get them to become a part of the pen. We should be pretty deep.”

Two of those experienced arms include sophomore Mike Vinson and junior double-threat Justin Shafer, who started every game for the Gators last year, between the outfield and on the mound.

Shafer not only led the team with the most at-bats and finished with a .300 batting average for second-best on the squad, but he also finished tied for first when it came to going yard.

Shafer’s powerful arm, experience, and reliability are qualities the team will need moving forward to help prevent another letdown like last season.

If practice is any indication, this 2014 team seems to be ready to get things going.

As for last year, right-hander Vinson spoke about moving past the team’s struggles of 2013.

“This is a new year, a new season. We just got to play baseball; it’s the same game we’ve been playing our whole lives.”

On February 14th, 2014, the Gators will open the season against Maryland in a three-game series at McKethan Stadium while also celebrating 100 years of Gator baseball.