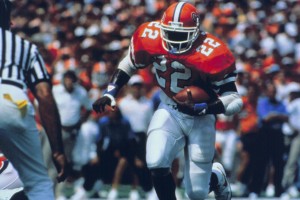 Emmitt Smith during his UF career

In part two of our four-part series profiling Gator and NFL great Emmitt Smith, he heads down to Gainesville to begin his college football career at the University of Florida.

After putting up astronomical stats in high school and being one of the most highly sought after high school running backs in the country, Smith was ready to begin his career with the Florida Gators. One of the toughest things that freshmen go through when they enroll in college is the transition period when they have to learn to balance more practices, a more diverse playbook and their academic schedule.

For Smith, he came in with the benefit of having run the same offense in high school as the one at UF, the I-formation power scheme which enabled him to have a smoother transition than some other freshmen.

“The sheer size of the players, the competition level and understanding how to balance your college academic schedule to your athletic schedule are some of the things you have to adjust to,” Smith said. “For me as student-athlete, I was always independent, so once I got on campus and got myself in to a nice routine, it became normal.”

As the team went through summer workouts and fall camp, Smith started the 1987 season as the third-string running back. In the first game that year, the Gators lost to Miami in which Smith saw no action during the game and in the second game against Tulsa Smith had 10 carries for 109 yards. It wasn’t until the third game of the year against rival Alabama that Smith saw his first career start, and it was one for the ages.

On the day, Smith ended with a then Florida record of 224 yards rushing along with two touchdowns. From that game on, Smith never relinquished the starting running back role besides four games during his sophomore year when he was injured. Smith would finish his freshman year with 1,341 yards and was named both the SEC and national Freshman of the Year.

After his junior season in 1989, Smith held 58 school records including career rushing touchdowns, 36, and rushing yards in a season, 1,599, which still stands to this day. Smith was named SEC Player of the Year after his junior year and was projected to be a first round pick in the 1990 NFL draft if he chose to forgo his senior season.

After sitting down with his family and new head coach of the Gators Steve Spurrier, Smith decided to enter the 1990 NFL draft, a decision he stands by to this day.

“I don’t regret that decision at all because, at the end of the day, when I sit back now and evaluate where I was at that time, physically, mentally, and emotionally, within my career at the University of Florida, I didn’t want to take any more risks,” Smith said. “I felt like I had done everything I could possibly do at the University as a football player and student and it was time for me to move on to the next level.”

Even though Smith only spent three years in the Orange and Blue, he left his mark on the Florida football program and the fan base that had the pleasure of watching him. Smith was now staring down one of the largest challenges he had ever faced, trying to make his childhood dreams of playing in the NFL come true.

Be watching for Part 3 of the series next week as the focus shifts to Smith’s Hall of Fame career in the NFL with the Dallas Cowboys and Arizona Cardinals.