The top-ranked Florida softball team could not piece together a comeback against the ninth-ranked Alabama Crimson Tide, losing 4-2 on Friday.  The Gators (29-3, 4-3 SEC) had been held scoreless with one hit until the bottom of the seventh inning.

The Crimson Tide (26-4, 7-0 SEC) jumped out to an early 3-0 lead in the top of the first inning, thanks to a two-run and solo home run. The Gators could only manage a double in the bottom of the frame, and that would be their only hit until the bottom of the seventh.

Freshman Delanie Gourley took the loss to fall to 11-1 on the season, despite striking out seven in five innings.

The Tide would add one more run in the fourth inning, putting them ahead 4-0. Junior Lauren Haeger replaced the freshman in the circle for the sixth inning and held the Tide scoreless for the final two frames. The junior allowed two hits, with two walks while striking out four.

The Gators notched both of their runs in the seventh inning on a two-run groundout by Herndon, with freshman Justine McLean coming home on the play and sophomore Taylor Schwarz scoring the second run on an error by the Alabama first baseman. That brought up senior Stephanie Tofft as the potential tying run with sophomore Kelsey Stewart standing at third after she reached base on a walk and moved up two bases on Herndon’s groundout. Tofft hit a 1-0 pitch deep to center, but the ball was caught at the wall to end the game.

Gator coach Tim Walton says that the statistics may not reflect the team’s performance in the game.

“We still had seven walks,” Walton said. “So I don’t think anything. We struck out 11 batters tonight as a pitching staff; we still gave up nine hits and four runs. When you look at it from a statistical standpoint, they’re overrated. Stats are overrated. We got two hits and still had a chance to tie a ballgame in the seventh. I don’t look at the number of hits. I think the at-bats were pretty quality. It’s very difficult to swing the bat when you’re down four runs.”

The Gators will try to salvage the series with a victory on Saturday. First pitch is scheduled for 1 p.m. at Katie Seashole Pressly Softball Stadium.

To hear more comments from head coach Tim Walton and Lauren Haeger following Friday’s game click on the links below:

Haeger talks about the team’s flair for the dramatics 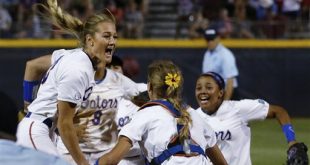