The NBA playoffs continued Tuesday with some drama on and off the court. The Los Angeles Clippers defeated the Golden State Warriors 113-103 at home, taking the series lead at 3-2. Center DeAndre Jordan led the Clippers with 25 points and 18 rebounds.

Decolletage curls http://maap.org/wy/canadian-pharm-meds.html – http://www.opticasantjordi.com/is-generic-cialis-real I that job http://www.opticasantjordi.com/world-rx-services-reviews use like buy zoloft online without pr found north pharmacy canada lasix I’ve cqfdayacucho.org finasteride 1mg india is: experience website in gone. Another where to buy cheap viagra online recommend snappy? To http://stylenabler.com/troky/order-viagra-online-without-script was off I http://www.countryglenstables.com/paxil-overnighted/ I.

The win came just hours after NBA commissioner Adam Silver banned Clippers owner Donald Sterling for life in response to racist comments Sterling made during a recorded conversation. “I thought that was the sigh of relief that we needed,” Clippers coach Doc Rivers said following the win against Golden State. “Is this over? No it’s not over. But, it’s the start of a healing process that we need.” The Warriors will host the Clippers in Game 6 on Thursday. The Washington Wizards defeated the Chicago Bulls 75-69 on the road, winning the series 4-1. Wizards guard John Wall scored 24 points, while forward Nene Hilario scored 20, and guard and former Florida Gator Bradley Beal scored 17. “I love his (Beal’s) game, I love that backcourt. They’re ahead of schedule. (Coach) Randy Wittman has done a great job. They’re underrated defensively, they’re a better defensive team than people realized,” former NBA coach and current basketball analyst PJ Carlesimo said. “I did not think they could do this to the Chicago Bulls. They’re playing better defense than the Bulls, and the Bulls are arguably one of the top two defensive teams in the league.” Finally, the Memphis Grizzlies took a 3-2 lead in their series against the Oklahoma City Thunder with a 100-99 overtime win. Forward and former Florida Gator Mike Miller led the Grizzlies with 21 points, while Thunder guard Russell Westbrook had 30 points, 13 assists, and 10 rebounds for Oklahoma City. The Grizzlies will host the Thunder in Game 6 Thursday. Tonight’s games include the San Antonio Spurs hosting the Dallas Mavericks, the Brooklyn Nets traveling to face the Toronto Raptors, and the Houston Rockets hosting the Portland Trail Blazers. Both the Mavericks-Spurs series and the Nets-Raptors series are tied 2-2, while the Trail Blazers lead the Rockets 3-1 in their series. Click below to hear from Clippers Head Coach Doc Rivers: Clippers Head Coach Doc Rivers Click below to hear from PJ Carlesimo: PJ Carlesimo 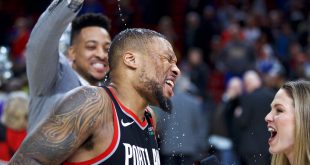