Coming off one of the most challenging non-conference schedules in the country, the 10th ranked Gator volleyball team is ready to wipe the slate clean as the Orange and Blue enter the second portion of the 2014 campaign, Southeastern Conference play.

Florida (6-3) kicks off its SEC schedule at Auburn (8-5) Friday night match-up before returning home Sunday as the Gators welcome Ole Miss (14-0) to the Stephen C. O’Connell Center for their conference home opener.

The Orange and Blue own a 41-1 record over the Tigers. The last time these two teams met, the Gators swept in three sets at the O’Dome.

The Gators also have the all-time series lead over the Rebels, with a 43-3 record. The last time they met, the Gators swept the Rebels in Oxford.

Florida was 16-2 last season in league play and finished second in the conference standings. Under Wise, Florida is 358-18 in SEC play. The Gators own 20 SEC Championships, including 18 straight from 1991-2008. Under Gator head coach Mary Wise, Florida has run its consecutive win streak to 37 matches against both the Tigers and Rebels, and the Orange and Blue will look to open conference play 2-0 to make it an undefeated 38-0 under Wise against the two league foes.

Freshman middle blocker Rhamat Alhassan (11 kills, 10 blocks) ranks third in the country with her .510 hitting efficiency. Junior setter Mackenzie Dagostino (43 assists, 17 digs) is 28th in the nation with 11.06 assists per set. Against the UCF Knights, sophomore right side Alex Holston led the charge with 20 kills, and three others slammed down double-digit kills. Defensively, UF posted 11 blocks, while senior libero Holly Pole scooped up a career-tying 20 digs to stabilize the Gators passing efforts.

“Mackenzie’s one of the most athletic setter we’ve had here,” Wise said. “Don’t let her size decieve you in terms of how physical she is above the net.”

You can catch both these matches on ESPN 850 WRUF.

Wise talks about the strength of her team 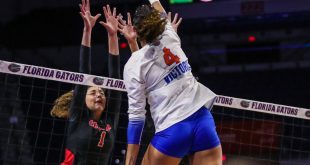