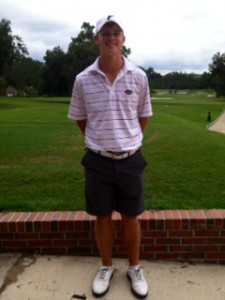 Ryan Celano made his Gator men’s golf collegiate debut at the Wolf Run Intercollegiate Tournament, and left quite an impression. As an amateur he’s had several notable achievements, including an individual title while on the 2013 Florida Junior Golf Tour, winning the qualifying round and earning a berth into the 2013 U.S Amateur, receiving a team victory at the 2013 South Florida PGA Pro-Junior Championship, and earning medalist honors at the 2011 PGA Junior Series. When asked about his success, Celano says, “I just want to take it one stroke at a time and keep hitting the fairways and greens.” As a Gator he recently won the team qualifying rounds finishing with a four-stroke lead. This was a breakthrough performance against an older and more experienced team. “It was kind of a relief, because I wanted to win so badly and I probably put too much pressure on myself, so it was nice,” he said. Celano started last weekend tied for 14th overall. He shot 75, 73, and 71 to finish tied for sixth place, the highest finish for the Gators. The player he tied with was a senior. “I was very excited to go to Indiana,” Celano said, “I’ve been there a lot because I have family there. My Mom and cousin came to watch, so that was a good experience.” For practice, the players spend time on the course by themselves as well as with the team and head coach JC Deacon. The players also go through tough workouts to improve their stamina. “I probably wouldn’t have made it through the 36 hole round the other day without the workouts.” Celano said, “We were playing from 8am-8pm and we still didn’t finish.” During interviews Deacon has praised Celano, commenting on his power, energy, and ability to learn and play well, while motivating the team. He also expresses the high expectations he has for Celano, but that doesn’t seem to cause the freshman any nerves. “I kind of have the same expectations he does, so I just need to put in the work in order to hopefully achieve those goals.” Celano adds, “It’s not extra pressure, but it does make me feel better that he thinks I’m going in a good direction.” When it comes to pressure, Celano can put enough on himself; his goal while at UF is to be an All-American, hopefully four times. He understands that is difficult, but knows he can put in the work. “There’s a long way to go for that, so I’m just going to try to get better everyday and work on my weaknesses to make them my strengths.” Despite how well he’s doing on the golf course, Celano’s main focus is to make sure he doesn’t procrastinate so he can keep going to UF and playing for the Gators. “I’m very fortunate to be here and I have a great opportunity, and I’m grateful for it, so I focus on that.” With such a great start and four years to go, Ryan Celano will be an important name in Gator golf.