Former UF pitcher Hudson Randall comes from a baseball family where his dad and older brother inspired him to start playing ball.

“My dad and older brother were already in the sport, so by the time I came of age I sort of just joined in on the fun,” Randall says.

Randall’s brother played with him all throughout his youth and in high school, “playing with me and catching me all the way through high school.”  However his brother’s career ended after high school was over.

Randall found a new brotherhood coming into college; his recruiting class he was one of the main reasons he wanted to come to UF.

“I thought this was the place to be especially after seeing my incoming class and all the great guys coming in. I wanted to be a part of it.”

The righty  had great success at the University of Florida by being top three in wins, ERA, starts and walks issued per nine innings in his career.  He also is the Gator NCAA Tournament all-time leader in strikeouts, wins, and innings pitched.  Randall credits most of his success to the people that surrounded him more then his own ability.

“I think it comes down to the group of guys that were here especially my class, 2009, we just had really great chemistry. All the guys wanted to come through in the clutch and it became a really good environment to grow good competition and brought the best out of me here,” Randall said.

After his junior season, Randall was drafted in the seventh round of the MLB Draft by the Detroit Tigers.  He decided to leave UF and go pro but the decision was not easy. One of the biggest factors on why he left was because most of his teammates were leaving.

“Again the group of guys I came with. I felt like I was going to be alone here so I wanted to give the pros a shot.”

Randall was released by the Tigers and now helps out the pitching coaches at UF. He is also finishing his degree and is looking to get into real estate but playing ball again is still an option if it’s the right place.

No matter what his future, Hudson Randall still remains statistically as one of the best pitchers in UF history. 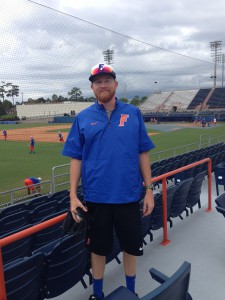 Im a senior at the University of Florida currently pursuing a degree in Telecommunications. I work for ESPN Gainesville 95.3 and anchor the Monday sports broadcast for WUFT First At Five. Im from New York and an avid sports fan of all New York teams.
Previous The drought continues, Bucs lose to Falcons
Next Gator Soccer To Host Mercer in Opening Round of NCAA Tournament