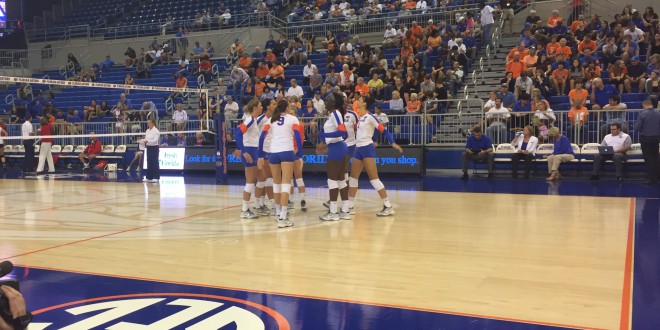 The Gator volleyball team will finally open up SEC play tonight as they take on the Ole Miss Rebels.  The Gators are on a three game winning streak and are now ranked fifth in the country.

Florida setter Mackenzie Dagostino had 48 assists during Florida’s last match against Florida State; she says she expects the team to do well in the SEC opener.

“It’s exciting…being in the SEC we always do really well so we’re hoping this year we can do the same thing,” she said.

The Gators’ blocking abilities earned them the second ranked spot in the NCAA in that category.  Dagostino says having multiple blockers gives them the advantage over Ole Miss.

“We have a big front line. I’m not too worried about one of their blockers when we have two or three of them. So I think we’re going to do great against them.”

Outside hitter Gabby Mallette recorded 10 kills during the FSU match.  She says the team takes their competition in a game to game mind set.

“I think it’s hard to go from preseason to SEC just because there is so much that has happened…I don’t think it’s going to be too hard for us to just take it one game at a time because if you look too far ahead or you keep looking in the past you’re kind of missing everything that’s going on right in front of you.”

Defensive specialist Samantha Dubiel says it is key to understand the competition’s game play and how to react to it.

“Looking at our opponent and using whatever they have as their strengths and working on it in practice,” Dubiel said.

The Rebels are on a 10 game winning streak as they enter the O’Dome tonight.  Florida coach Mary Wise says their success will prove to be challenging.

“Ole Miss has had a very successful pre-conference season. I think they’ve won 10 in a row coming into conference play. So we’re playing a hot team and who returned some of their leading point scorers, including one of the best middles in the league.”

Wise believes both SEC teams will have some big hops throughout the match.

“This will be a great match for it to be a VERT broadcast meaning in terms of the players wearing the jump recording device because there’ll be some big time jumps in the O’Dome.”

The Florida Gators will take on the Ole Miss Rebels tonight at 7:00 PM.  Live coverage will begin here at 6:50 PM on ESPN Gainesville 95.3 FM.

Dagostino says the Gators are successful in SEC

Wise says there will be big jumps during match