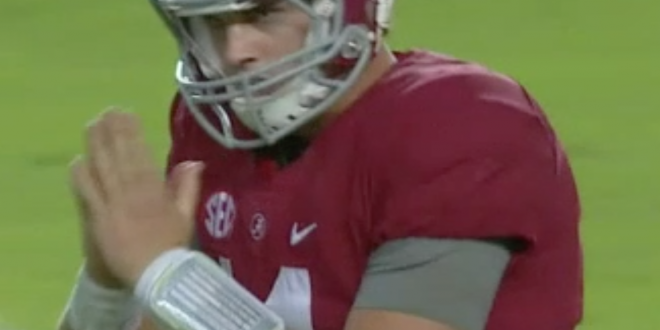 It’s a top 10 battle in the Lone Star State as ninth ranked Texas A&M is going for its first 6-0 start since 1995. Visiting Alabama, ranked 10th in the land but already saddled with a loss, will likely need a victory to stay alive in the chase for a division crown. The Tide have won three straight since falling to Ole Miss back on September 20th, but the Aggies could provide another extremely tough test.

“This is obviously a very challenging game for us,” Nick Saban said. “A&M is really playing well on both sides of the ball and on special teams, and they’ve got some really good skill guys.”

Leading the way in that skill group is wide receiver Christian Kirk, who has nearly double the catches of anyone else on the team with 32. He also leads the Aggies with four touchdowns. Kyle Allen has been ultra-efficient in getting the ball to Kirk and the other receivers — he’s tossed 13 touchdowns against just two interceptions through five games, completing 64% of his passes.

Per usual, Alabama’s strength lies in their front seven on defense. The Tide ranked fourth in the country in rushing yards surrendered per game (77.3). However, A&M uses a similar spread attack that Ole Miss employs — a style that gave the Bama defense fits in their sole defeat. Rebels quarterback Chad Kelly threw for 341 yards in that game, so you can expect head coach Kevin Sumlin to let Allen air it out. The Aggies will still look to find stability on the ground as well.

“We’ve tried to establish the run a little bit more this season…showing some different formations instead of just being a four-wide team,” Kevin Sumlin said.

Senior Tra Carson has shouldered the load for the rushing attack, racking up 430 yards and four touchdowns on the year.

The biggest point of emphasis for Nick Saban’s crew on Saturday afternoon might be winning the turnover battle. From 2009-2013, Alabama had the best margin in the SEC at +54. Last year it was at -2. The Tide’s turnover margin is even on the 2015 season, putting them 73rd in the nation in that category.

Kickoff from Kyle Field is set for 3:30 on CBS.