For the first time in Wrigley Field history, the Cubs clinched a playoff series at home. The bats were hot for Chicago as Javier Baez hit a three-run home run in the second, Anthony Rizzo hit a tie-breaking solo shot in the sixth, and Kyle Schwarber hit a home run in the seventh.

The second team in the NLCS will be decided in a Game 5 on Thursday night.

The Los Angeles Dodgers forced Game 5, to be held back at Dodger Stadium, after defeating the New York Mets 3-1. Clayton Kershaw snapped his five-game postseason losing streak throwing seven innings and allowing only three hits. New York’s Daniel Murphy hit a home run in the fourth, but after that a Met didn’t get past first base. Scoring for the Dodgers, Adrian Gonzalez hit an RBI single, and former Met Justin Turner added two more runs with an RBI double. Kershaw stopped any attempts the Mets made to advance, sealing their victory.

“This kid [Kershaw] is tremendous. Everything you’re supposed to be, he is,” says Los Angeles Manager Don Mattingly. “This guy is an animal. The way he works, represents us, the game of baseball, himself, I mean he’s really a credit to the game so you’re really happy for him to be able to do that tonight.”

Game 1 of the NLCS will be held on Saturday night. 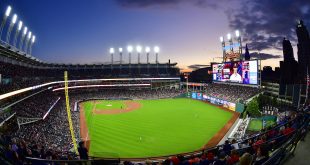 MLB Aiming to Return to Play in July