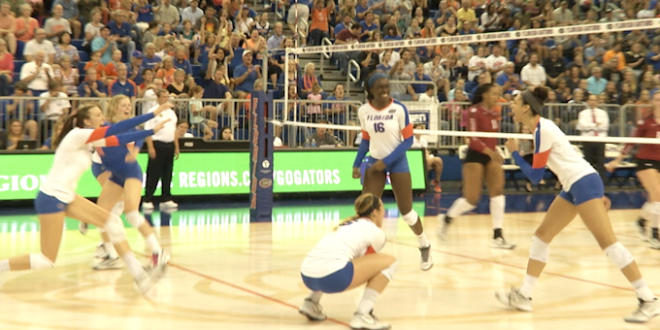 The Gator volleyball team swept Arkansas Friday with the help of an outstanding defensive effort, not allowing Arkansas to hit any higher than .067 by the end of each set. and now the Gators will look for another SEC win as they host Missouri Sunday.

The last time Florida and Missouri met was a disappointing loss for the Gators who gave up a 2-0 lead on the road and lost the match three games to two.  Florida head coach Mary Wise says that Missouri has more assets than one including a speedy offense and 5’9″ outside hitter Carly Kan.

Looking back at the earlier match between Florida and Missouri, the Tigers were able to take the last three sets of the game through not only their perseverance, but also on mistakes by Florida.  Wise says the team has learned from the first game against the Tigers and put that to use against Arkansas and will look to do it again Sunday.

“How we scored against them.  How they scored against us.  What adjustments we can make.  I’d like to think some of the areas that helped us [Friday night], defensive transition, serving location, the setter-hitter connection, those things will help us on Sunday as well.”

Florida and Missouri will go head to head Sunday in the O’Dome.  First serve is set for 1:30 PM and live coverage begins at 1:20 PM on ESPN Gainesville 95.3 FM.