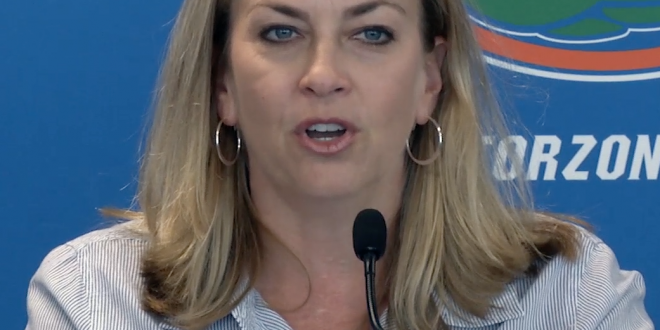 Coming off of an eventful weekend, the UF women’s basketball team is feeling energized from appearances at the Climb for Cancer event and the Meet-and-Greet Tip Off Party at Girls Place in Gainesville. The team has shown a great deal of interest in getting involved locally with youth and has also shown a great deal of interest in “wanting more” out of this season. With that desire, it requires the team to have 6 am practices and high intensity scrimmages.

“It’s going to give us a really good indication of where we are and measure ourselves of where we think we are and where we want to be in another week. That’s the way we are evaluating, from week to week. What we need to put in, where we need to get more reps, the things we don’t seem to understand, and the things we’re doing really well,” said Florida coach Amanda Butler.

Any good coach will tell you that having competition between players during practices promotes a high level of competition against opposing teams during game time. Competition is exactly what the coaching staff is promoting.

“It gets really intense and that’s another thing that we want to do… we want that to be a part of our identity, as well. We don’t just compete well, but we compete with a great deal of intensity and I think our practices give us that opportunity,” says Butler.

You can’t talk about setting the tone without talking about junior guard Ronni Williams. Standing tall at 6 foot, Williams led the team in scoring last season, including 18 double-figure scoring games.

“I really like Ronni’s leadership. I think that’s a part of herself and her personality and ultimately her game that she’s taken a great deal of ownership of this year. And she’s really making her voice heard. Doing a great job of leading by example. I would think she’s leading our Brick House race right now, which is typically an indication of not just how you’re playing, but also how you’re communicating,” Butler said.

Ronni Williams is the highest-ranked player ever signed by the Gators since the Prep Rankings began and the team awarded her at the MVP award last season.

The Gators continue to practice and get ready for their season opener on Friday, November 13th at Temple University.

A senior at the University of Florida reporting on Gator sports, local Gainesville and surrounding area sports, and telling the stories of local athletes. Born and raised in Gainesville, Florida with a passion for telling people's stories and having fun doing it.
@SportsDarwinism
Previous Opening Night in the NBA
Next Florida Cross Country Gets Ready For the SEC Championships