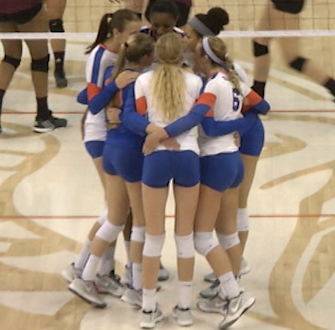 After their victory over Mississippi State, the Florida volleyball team is on a nine game winning streak with eight of the wins coming via the sweep.  With a 10-3 SEC record, Florida will travel to Auburn Sunday to face the Tigers in another showdown.  Florida won the last encounter in a sweep, but Gator coach Mary Wise says Auburn still poses threats similar to what MSU displayed Friday afternoon.

“When we played Auburn they played us very well.  They, too, run a very fast offense, but a bigger team than Mississippi State…with a very offensive oriented setter and probably a better digging team.”

Florida volleyball is 40-0 under Wise against the Auburn Tigers.  However, she believes Auburn could have been SEC championship contenders had they won their past three matches that went to five sets.

“Can we really turn up the switch here and how much better we’re going to need to be to be successful on the road?  Auburn…could easily be in the race for an SEC championship if just winning one or two of those five setters.”