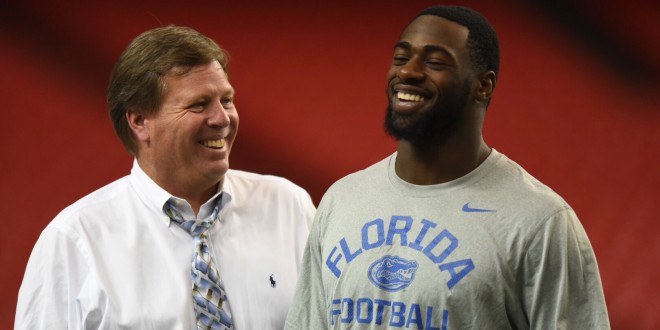 One Day Away from Gators vs. Tide Showdown in Atlanta

ATLANTA — We’re now less than 24 hours away from kickoff between the 18th ranked Florida Gators and the number two team in the country, Alabama Crimson Tide.

At this point, the game plan is in as both the Gators and the Tide performed their walk-through today in the Georgia Dome. Prior to the Florida taking the field,  head coach Jim McElwain met with the media and discussed the difficulty in preparing against a very good Alabama team.

One element that makes Alabama so difficult to prepare for is number two in crimson, junior running back Derrick Henry. Henry leads the nation in rushing yards and rushing touchdowns with just shy of 1,800 yards and 22 trips to pay dirt on the year. While the rushing numbers stand out, McElwain believes it’s the tough yards and his overall game that makes him hard to stop.

Florida will do their best to emulate Alabama and find a way to get junior running back Kelvin Taylor involved. With Alabama allowing the lowest amount of rushing yards per game, just over 77, that’s easier said than done.While members of the Crimson Tide front seven will need a breather during the game, according to McElwain, it doesn’t necessarily mean it will be easier to move the ball when they’re out.

Some have wondered whether or not the Gators will utilize sophomore quarterback Treon Harris’s mobility in this game against an Alabama unit that has allowed 55 yards per game, prior to sack yardage being subtracted, against mobile quarterbacks. McElwain wouldn’t tip his hand, but he acknowledges that Harris will have to use his legs at some point.

One point of emphasis that McElwain is focusing on is keeping the offense on schedule and ahead of the chains.

All questions will be answered starting at 4:00 tomorrow afternoon as toe will meet leather in Atlanta for the SEC Championship.

After a successful regular season campaign, the Tennessee Titans came into the postseason with an …