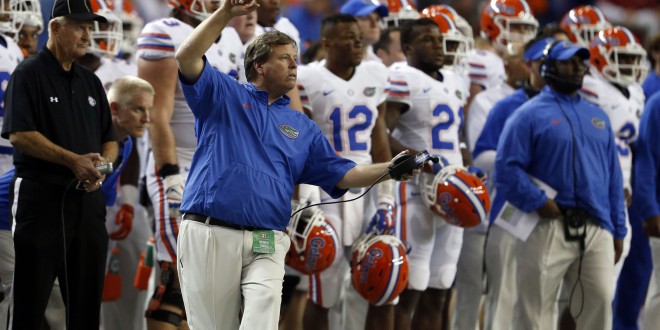 Florida football head coach Jim McElwain was named SEC Coach of the Year on Wednesday afternoon, becoming the sixth coach in program history to earn that mark and the third to win it in his first season at the helm. He was also just the third coach in conference history to guide their team to the SEC Championship game in their first year, as the Gators went 10-3 including an unbeaten record against division foes.

“I can’t tell you how proud I am of these players and the commitment they’ve made,” McElwain said. “It’s a great building block for the future.”

Five Gators players were selected to the All-SEC teams: Jonathan Bullard, Vernon Hargreaves III and Jalen Tabor were tabbed 1st team, and Antonio Morrison and Johnny Townsend were named to the 2nd team.

Florida now has three weeks to prepare for their Citrus Bowl matchup with Michigan on January 1st. In the meantime, Coach McElwain and his staff will do some heavy recruiting with National Signing Day roughly two months away.

“A lot of good players are coming, and going to want to come,” McElwain said. “I’m excited about it…there’s a lot of momentum.”

Florida currently has the 10th ranked 2016 class according to ESPN RecruitingNation.

Previous Magic Come Up Short Against Suns In The Desert
Next NFL PREVIEW: Tampa Bay Buccaneers vs. New Orleans Saints

Now that the sports season is winding down for the Gator programs, we’re going to …