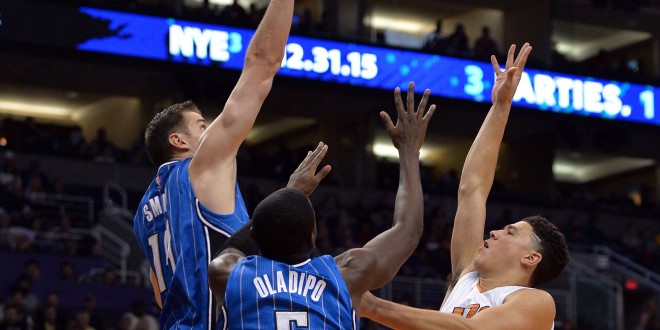 Magic Come Up Short Against Suns In The Desert

The Magic, playing for the second straight night, ended their five game west coast trip in Phoenix, posting a 3-2 record during that span. Heading into their match up with the Suns, the Magic were one of the hottest teams in the NBA, winning six of their last seven games.

The Magic only trailed 49-47 at halftime but the deficit grew exponentially in the third quarter when Phoenix guards Brandon Knight and Eric Bledsoe accounted for a combined 22 of the Sun’s 35 third-quarter points, giving them an 11-point lead heading into the fourth quarter.

With help from leading scorer Nikola Vucevic, who posted his third consecutive double-double, and Tobias Harris, the Magic were able to tie the game late in the fourth quarter. The Magic however failed to make another field goal in the last 2:45 of the game, while Bledsoe scored seven of the Sun’s final nine points of the game to secure their sixth home victory of the season.

While the Magic did rally from an 11-point deficit and have learned to win close games throughout this season, head coach Scott Skiles was not pleased with the way his young team played on Wednesday night.

The Magic now trail the division leading Charlotte Hornets by one and a half games and currently sit in ninth place in the Eastern Conference, half a game behind the eighth place Chicago Bulls.

The Magic return to their home court this Friday night to take on LeBron James and the defending Eastern Conference champion Cleveland Cavaliers. Tip-off is scheduled for 7:00 p.m.