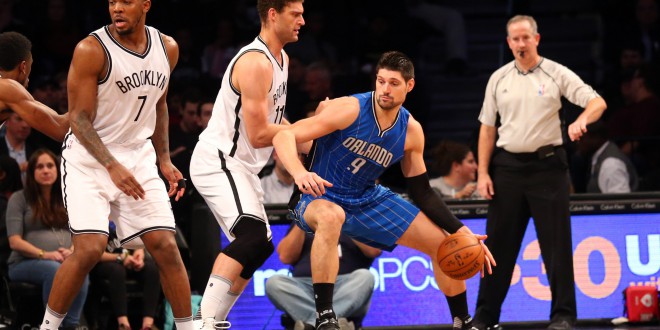 Magic Get First Win In Brooklyn, Cut the Nets Down 105-82

New York City is known as the city that never sleeps.

For the Orlando Magic, the Barclays Center in Brooklyn was known as the arena they could never win in.

The Magic put on a defensive clinic against the Brooklyn Nets en route to their 105-82 victory. Last night’s game marks their first win on the road against the Nets since they moved from New Jersey to Brooklyn during the 2012-2013 season, a span of six straight losses.

The Magic led 52-45 at the half, and pulled away in the third and fourth quarters, scoring 53 more points to extend their lead.

“We’ve had our ups and downs, and tonight we were kind of back on track like we were when we were playing well a couple weeks ago,” Magic Head Coach Skiles said. “we were driving in seeing people, had several passes from inside out which were the correct plays to make, and then we finished them off by knocking down shots.”

The Magic had lost two-straight games coming into last night’s matchup, the most recent being a 35-point drugging at the hands of Lebron James and the Cleveland Cavaliers.

That embarrassment of a loss had to play a factor with how aggressively the Magic played on the defensive end.

“I didn’t expect us, because we got blown out, to just come and lay down”, said Skiles.

Normally a defensively stout team, Orlando had 12 steals on the night, and are currently ranked No. 9 in the NBA in opponents points per game and opponents field goal percentage.

Nikola Vucevic was the top performer of the night with 18 points, six rebounds, and four assists to go along with one blocked shot. This was only the sixth time all season that a Magic player led both teams in scoring, with four out of the previous five belonging to Evan Fournier, who only had three points on the night.

Jarret Jack scored 15 points for the Nets, who committed 17 turnovers in the loss, and trailed by as many as 26 points.

Brook Lopez added 11 points and six rebounds on four of 15 shooting from the field.

3rd year forward Andrew Nicholson continued his solid play off the bench for the Magic, scoring 15 points on six of nine shooting, including an impressive fourth-quarter slam over Andrea Bargnani.

Orlando is now 13-11 overall on the season, sitting in the eighth spot in the Eastern Conference standings with Detroit and Atlanta right on their comet tail.

The Magic will look to take the positive momentum from last night’s win into their next matchup with the Charlotte Hornets Wednesday night.

Skiles on bouncing back from Cavaliers loss