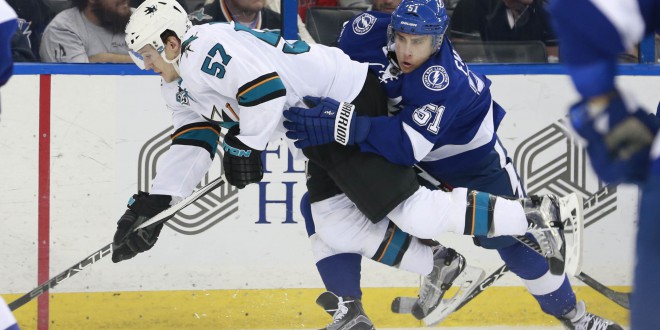 The Tampa Bay Lightning suffered a 4-2 loss to the San Jose Sharks on Tuesday night at Tampa’s Amelie Arena. This loss puts Tampa Bay (30-22-4) at risk of missing the playoffs as they are currently tied for the eighth and final playoff spot in the Eastern Conference.

The Lightning have also lost four of their past five games and in this game, their defensive errors cost them heavily. Although Tampa started strong scoring the opening goal, The Sharks (30-20-5) scored two goals in the second period. Heading into the third period with a 2-2 tie, Tampa Bay was hoping steal the win on home ice. However, San Jose didn’t let that happen as Matt Nieto and Melker Karlsson scored to give the Sharks a 4-2 lead with 1:43 to play. Joel Ward and Joe Pavelski also scored for the Sharks early in the game. Tampa Bay’s right winger Ryan Callahan, says their defense continues to struggle.

Callahan scored the opening goal for Tampa Bay, firing the puck directly past Shark’s goalie Martin Jones. Cedric Paquette scored the goal that tied the game at 2-2.  Lightning coach, Jon Cooper hasn’t lost confidence in his team. Cooper says that their struggles aren’t for a lack of effort.  Right Winger J.T Brown, says the Lightning needs to make adjustments after the way the third quarter played out.

Tampa Bay next plays at home Thursday against the Winnipeg Jets (25-28-3) before playing the team they are tied with for the final Eastern Conference playoff spot, the Pittsburgh Penguins, on the road on Saturday.