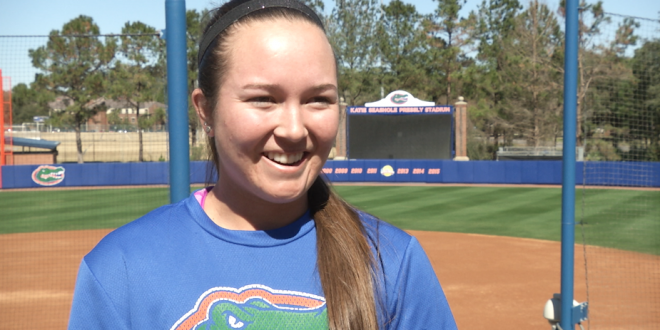 Following a perfect opening weekend at the USF Wilson-DeMarini Tournament, the number one team in the country returns home on Wednesday for a doubleheader with Jacksonville University.

The Gators dispatched Illinois State, #2 Michigan, Virginia Tech and USF by a combined score of 38-1, doing so with patience at the plate and contributions from all parts of the lineup. Sophomore C/1B Janell Wheaton led the way offensively, hitting .500 with a home run and nine RBI. Senior catcher Aubree Munro hit just .225 in the 2015 regular season, but impressed in the first quadruplet of games with a .400 batting average.

“Our play was outstanding,” Walton said. “I really felt overall that the chemistry on the field was very good.”

One glaring note of Florida’s offensive success was that nearly none of it came from the bat of All-American Kelsey Stewart — she notched just one hit in 11 at-bats. However, her teammates boosted her up, as eight of the starters hit above .300 over the weekend. The starting pitching was solid as well: The trio of Delanie Gourley, Kelly Barnhill and Aleshia Ocasio did surrender 12 walks, but gave up just nine hits and one earned run. Coach Walton had high praise for his heralded freshman.

“The expectations for a kid like Kelly Barnhill…coming with those kind of accolades, the pressure is on her,” Walton said. “She went out and pitched a really nice game against Michigan.”

The twin-bill between the Gators and Dolphins gets under way at 5:00 p.m. from Katie Seashole Pressly Stadium. The games can be seen live on SEC Network+ and additional coverage will be provided by WRUF reporters Nikko Tan and Fernando Juncadella. You can find them on Twitter at @TheNikkoTan @FJuncadella and @ESPNGainesville.