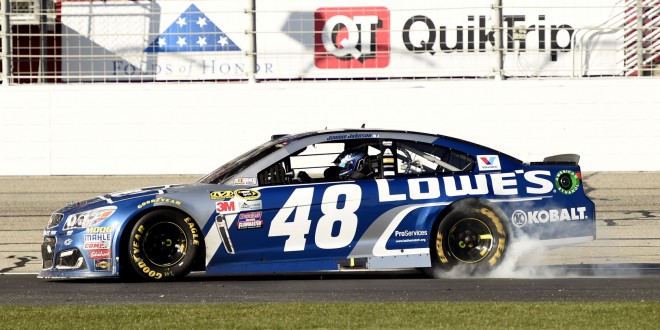 Jimmie Johnson is celebrating today after a victory yesterday in the Folds of Honor QuikTrip 500 at Atlanta Motor Speedway.

Kevin Harvick led for 131 laps, but Johnson took the lead after making a faster green-flag pit stop than Harvick. Towards the end of the race, Johnson led Harvick by about five seconds when a yellow flag forced overtime after Ryan Newman spun following a blown tire.

In overtime, Johnson continued to hold the lead when a late crash forced caution. Johnson went on to win the race under the caution flag.

Congrats to my friend and teammate @JimmieJohnson on tying my father today in Cup wins. Proud to have ran 2nd on this momentous occasion.

Johnson said he had to pay respect to Earnhardt following his victory. On his victory lap, Johnson held up three fingers to commemorate the number of Earnhardt’s car.

Junior telecommunication student at the University of Florida. Passionate about all things related to sports.
@@EllenBazley
Previous Magic, Heat Pick Up Wins
Next Florida Men’s Basketball Falls At Home To No. 22 Kentucky